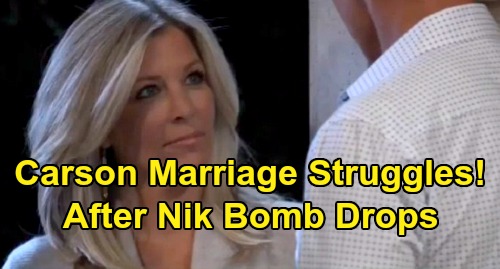 General Hospital (GH) spoilers tease that Sonny Corinthos’ (Maurice Benard) rivalry with Jasper “Jax” Jacks (Ingo Rademacher) could be reignited. GH fans know Jax and Sonny have their fair share of issues with each other, but they try to get along for Josslyn Jacks’ (Ingo Rademacher) sake. Of course, Carly Corinthos (Laura Wright) also has a nice bond with Jax, which Sonny manages to tolerate.

However, Sonny’s bound to grow suspicious of Carly and Jax soon. General Hospital spoilers say November sweeps will bring major drama for this trio. It seems Carly will find herself in the loop on Nikolas Cassadine’s (Marcus Coloma) survival and will be sworn to secrecy – even from Sonny.

That’ll naturally be a hard pill for Carly to swallow. She likes having an open and honest relationship with Sonny, especially since secrets have torn them apart in the past. Nevertheless, Carly cares about Jax and will apparently keep her mouth shut.

Jax may argue that despite Sonny’s love for Spencer Cassadine (Nicolas Bechtel), he needs to stay in the dark. The less Sonny knows, the better – at least as far as Jax is concerned. Unfortunately, Carly’s bound to exhibit some strange behavior thanks to her secret with Jax. It won’t take Sonny long to realize something’s up.

Will Sonny eventually suspect Carly’s having an affair with Jax? Could this lead to cheating suspicions down the road? Time will tell, but you can bet Sonny won’t like being left out. He’ll inevitably sense that Carly’s keeping something from him involving Jax, so he’ll have to draw some unfortunate conclusions from that.

Carly and Sonny had some mild fights over the Dev Cerci (Ashton Arbab) situation, but this is a chance for GH to rock this couple with some real conflict. It’s been a while since Carly and Sonny truly sparred, so that’ll be an interesting obstacle for them to work through. There’ll come a point when Sonny’s had enough and will surely confront Carly about her lies.