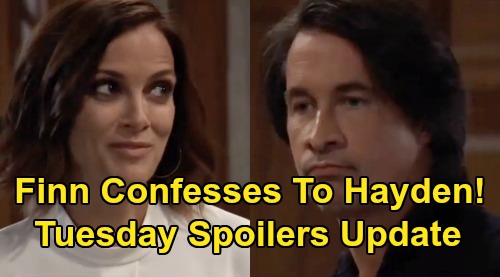 General Hospital (GH) spoilers update for Tuesday, November 12, teases that Cassandra Pierce (Jessica Tuck) will hear Anna Devane’s (Finola Hughes) offer. Cassandra was getting pretty nasty with her little hostage, but Anna came swooping in. She warned Cassandra to unhand Charlotte Cassadine (Scarlett Fernandez) and is about to present a tempting trade.

Anna will suggest that if Cassandra lets Charlotte go, Cassandra can walk free, too. She’ll promise to let Cassandra fade off into the sunset, but Anna’s word may not be good enough. Cassandra will inevitably fear Anna’s setting a trap, but there must be a way to work this out. Anna will do whatever it takes to make sure Charlotte’s returned home alive and well.

Until relief comes, Lulu Spencer (Emme Rylan) and Maxie Jones (Kirsten Storms) will just have to wait and worry. They’ll discuss something that Peter August (Wes Ramsey) overhears and disagrees with on Tuesday. Peter might shut down Lulu and Maxie’s guilt over the situation. They weren’t really watching Charlotte at the counter, but how were they supposed to know an international criminal was on the loose?

Maxie and Lulu could also have suspicions about how Valentin’s handling the matter. If they take any kind of negative stance, Peter might pipe up against them. Despite Valentin’s many flaws, he’s a devoted dad who’d do anything to protect Charlotte. Peter may point out that they’re all on the same side here.

Other General Hospital spoilers say Valentin will face Jason Morgan’s (Steve Burton) interrogation. Jason will pump Valentin for information on Cassandra, but Valentin probably won’t divulge much. He doesn’t want to give anything away that could harm Nina Reeves (Cynthia Watros) or jeopardize Charlotte’s return home.

As for Jordan Ashford (Briana Nicole Henry) and Laura Webber (Genie Francis), they’ll mull over a deal and wonder if somebody else might’ve taken it. Laura and Jordan may be trying to figure out who was driving the van and aiding Cassandra’s getaway. They can run down any suspects they want, but there’s no way presumed dead Nikolas Cassadine (Marcus Coloma) will make the list!

Nikolas will continue to keep his comeback under wraps – at least for the most part. Nevertheless, Jasper “Jax” Jacks (Ingo Rademacher) seems poised to let Carly Corinthos (Laura Wright) in the loop. She’ll stop by to see Jax on Tuesday, so he’ll admit he has a lot to tell her. There’s no word yet on exactly when Jax will confess, but he’ll indeed divulge a shocker eventually.

We know Jax and Carly have a sneaky deal coming up, which could involve Carly joining the secret Nik circle. Carly will ultimately be asked to keep a bombshell from Sonny Corinthos (Maurice Benard), and that’s bound to spell trouble. GH fans won’t want to miss Carly’s tricky dilemma.

In the meantime, Hayden Barnes (Rebecca Budig) and Hamilton Finn (Michael Easton) will bond as co-parents. They’ll enjoy some tender moments now that Violet Finn’s (Jophielle Love) asleep. Finn will share something that truly touches Hayden’s heart on Tuesday. She’ll suggest she’s dreamed of hearing Finn say it, so this may involve Finn feeling like a dad or some other confession of family gratitude.