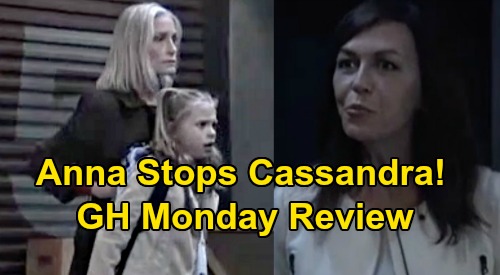 General Hospital (GH) spoilers review for Monday, November 11, reveal that Valentin Cassadine (James Patrick Stuart) and Nina Reeves (Cynthia Watros) happened to be at the police station inquiring about Cassandra Pierce’s (Jessica Tuck) escape when they learned that Charlotte Cassadine (Scarlett Fernandez) was missing. Valentin immediately became concerned and pulled Nina aside to tell her that he was sure that Cassandra took Charlotte and that Cassandra would be calling him soon.

So Nina created a distraction by loudly attacking Lulu Spencer (Emme Rylan) and accusing her of doing something to drive Charlotte off, to give Valentin some time alone to wait for Cassandra’s call outside of earshot of the police. Meanwhile, Cassandra had Charlotte down at the pier, where she hacked the little girl’s phone and turned off its tracking device. Cassandra told Charlotte that no one would find them until she wanted them to.

Eventually, Cassandra called Valentin from Charlotte’s phone, and Valentin told Cassandra that if she let Charlotte go in a safe public place, then he’d make whatever arrangements she wanted. Cassandra gave Valentin her demands, but GH viewers weren’t privy to those demands. Valentin was able to have his conversation with Cassandra undetected by the police thanks to Nina’s diversion, and then he and Nina slipped out of the police station.

Charlotte then smartly figured out that Cassandra wasn’t going to let her go, so Charlotte kicked Cassandra and tried to run. Cassandra managed to catch her and threaten her, when suddenly Anna Devane (Finola Hughes) appeared from the shadows and told Cassandra to unhand Charlotte and pick on someone her own size. Of course, knowing Anna, she could be armed, so this could be an interesting standoff.

Meanwhile, Jasper “Jax” Jacks (Ingo Rademacher) caught Nikolas Cassadine (Marcus Coloma) returning home and confronted him about where he’d been. Nikolas admitted to helping Cassandra escape, which prompted Jax to explode in anger. As they were arguing, Jason Morgan (Steve Burton) knocked on the door, so Nikolas hid.

Jason revealed to Jax that Sam McCall (Kelly Monaco) got a partial plate number on the white van that picked up Cassandra from Rice Park. Turns out, the van was rented with a credit card belonging to one of Jax’s companies. Jax played like his card was hacked, and Jason went along with it but clearly didn’t buy it. Jason then noticed some muddy footprints in the house and questioned Jax about it, which Jax passed off as being from construction workers.

Jason ultimately told Jax that he can always come to him, no questions asked, and that if he finds out anything about Cassandra, he wants to know about it. After Jason left, Jax had a tantrum and blasted Nikolas for implicating him in this mess and for being an amateur. Jax then wondered why he shouldn’t just hand Nikolas over to Jason right now. But Nikolas probably isn’t worried about that, since Jax would also be implicating himself in some pretty serious matters.

Finally, Lucas Jones (Ryan Carnes) blasted Julian Jerome (William deVry) and told him that he no longer wanted anything to do with him. Julian tried to act innocent, but Lucas revealed that he knew all about how Julian had staged it to look like Brad Cooper (Parry Shen) was having an affair. Julian then tried to explain himself, but Lucas said it was all too exhausting and that they were done since Julian had made a calculated attack on his family.

Julian then announced that he had something to say that would help Lucas understand why he did what he did. Clearly, Julian was about to tell Lucas about Wiley Cooper-Jones (Theo and Erik Olson) actually being Julian Corinthos, but suddenly Brad called Lucas with news about Cassandra’s escape. As it turned out, Brad was present in Kelly’s when Cassandra was there, and Brad was rattled.

That sent Lucas to Kelly’s to meet up with Brad, where the two men appeared to patch things up as Julian ominously peered in the window. One wonders whether Julian will follow through and tell Lucas about Wiley, or if he’ll simply choose to handle Brad in a more permanent way.