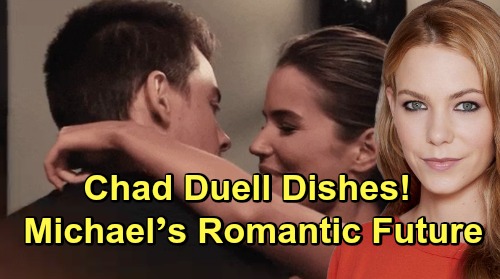 General Hospital (GH) spoilers tease that Michael Corinthos (Chad Duell) will take a big step forward. He was burned badly by Nelle Benson (Chloe Lanier), so it took him a while to get back in the dating game. Of course, Michael also had to deal with the loss of Jonah Corinthos – who is actually still alive and living as “Wiley Cooper-Jones.” It was a lot to tackle, but things are looking up for Michael.

Michael tried using a dating app, but that was a total disaster. He’s the kind of guy who prefers a natural spark. When it’s right, it’s right. Michael definitely thinks it feels right when he’s with Sasha Gilmore (Sofia Mattsson) and that’s why he’ll push for a heart-to-heart. These two have been keeping it casual, but Michael will let Sasha know he’d like it to be more.

Despite Sasha’s initial reservations, she’ll be on the same page. Sasha is posing as Nina Reeves’ (Michelle Stafford) daughter as part of Valentin Cassadine’s (James Patrick Stuart) scheme. That secret haunts her daily, but she’s quickly forming a strong bond with Michael. Sasha is falling hard, so she’ll choose to put her own happiness first. She’ll tell Michael she’s interested in seeing where this leads.

Naturally, Michael will be over the moon. He’ll feel like he’s finally found a nice, honest girl he can rely on. Once the truth inevitably comes out, will Michael be able to get past Sasha’s lies? Time will tell, but Chad Duell weighed in on his character’s love life in the new issue of Soap Opera Digest. Duell reflected on Michael’s doomed past romances, but he also expressed hope for the future.

“He hasn’t had much luck with the ladies,” Duell admitted. “Two of them died; one of them tried to kill him. It’s not a good track record.” Duell is certainly right about that, but what about Sasha? How does she stack up against his other GH love interests? “I think anybody would seem better than Nelle, his previous relationship, at this point!” Duell exclaimed.

Nevertheless, Duell insisted there are reasons why Michael is specifically drawn to Sasha. Michael is attracted to her and loves her sweet side. Although they have gone too deep yet, General Hospital spoilers say there’s a connection between them and they’d both like to build on that.

“You can see that there is a lot of room for them to grow with each other, and it’s going well so far,” Duell said. “Michael has never been that guy where he just wants a fling; he wants to invest a little bit more.” Will Michael regret the investment he’s making with Sasha or is there a chance he’ll understand the chaos she got caught up in?