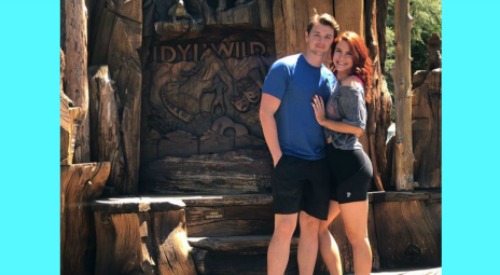 General Hospital (GH) spoilers reveal that one ABC soap star is quite the doting boyfriend. GH fans know any girl in Port Charles would be lucky to have the kind and handsome Michael Corinthos (Chad Duell). He’s proving to be a great catch for Sasha Gilmore (Sofia Mattsson), but she’s keeping huge secrets and fighting against a serious illness. Dating isn’t quite the priority right now!

Nevertheless, Sasha hopes to get her future with Michael back on track eventually. The future’s looking bright for Michael’s portrayer as well. His longtime love Courtney Hope recently celebrated a birthday, so he definitely made her feel like a queen. On Instagram, Hope shared a post of gratitude along with a cute pic. She’s clearly crazy about Duell and thrilled to have him in her life.

Hope said, “Thanks for making all my days special @duelly .. I love this man so much. My smile is permanent, my heart is so happy, and I couldn’t be luckier to be in love with my best friend. #birthdaygetaways.” Their fun photo was taken at Idyllwild, California. It looks like they had a fabulous time exploring and relaxing for Hope’s birthday celebration.

Hope also posted her message on Twitter, which brought some comments from both General Hospital and Bold and the Beautiful viewers. One fan exclaimed, “Such a cute couple!!!” Another fan’s hoping Duell and Hope might tie the knot before long. She said, “Wedding bells for #Chourtney soon????? #fingerscrossed”

“Gorgeous looking couple,” said one more soap watcher. “And u both are wonderful on your respective shows.” A fan even suggested that Hope should make her way over to General Hospital and play a new love interest for Michael. Hope currently plays Sally Spectra on The Bold and the Beautiful, and she does a fantastic job. Even so, we wouldn’t complain if she wanted to soap hop one of these days!

For now, Hope and Duell are just happy being in love offscreen. As for Michael in Port Charles, General Hospital spoilers say he’ll have some tough choices to make once Sasha’s fake daughter scam is revealed. We’ll give you updates as other GH news comes in. Stay tuned to the ABC soap and don’t forget to check CDL often for the latest General Hospital spoilers, updates and news.

Thanks for making all my days special 😍 @duelly .. I love this man so much. My smile is permanent, my heart is so happy, and I couldn’t be luckier to be in love with my best friend. #birthdaygetaways