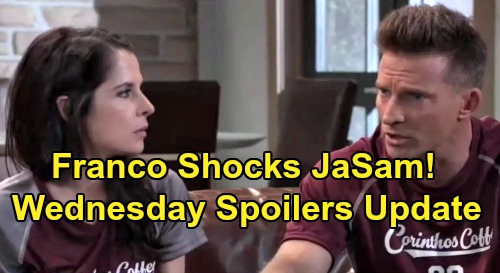 General Hospital (GH) spoilers update for Wednesday, August 14, tease that Jason Morgan (Steve Burton) and Sam McCall (Kelly Monaco) will enjoy some time alone at home after Sam’s released from the hospital. These two have certainly earned a reprieve after the ordeal they’ve been through with Shiloh Archer (Coby Ryan McLaughlin).

And as far as they know, the previous evening’s excitement ended with Sam being rescued from the freezer outside of the old Dawn of Day house. They’ll be in for a surprise when they get a visit from Robert Scorpio (Tristan Rogers) who will fill them in on his plans to prosecute Shiloh for his myriad of crimes, including last night’s infractions.

Robert will then fill Jason and Sam in on what went down with Franco Baldwin (Roger Howarth) and Cameron Webber (William Lipton). JaSam will learn about Franco being given Drew Cain’s (Billy Miller) memories from the flash drive, and they’ll be horrified by the news. It might even bring up some feelings of guilt for Jason, since he didn’t go after Shiloh and chose to stay with Sam instead.

Meanwhile, on the new episode of GH on Wednesday, August 14, Elizabeth Webber (Rebecca Herbst) and Drew will do their best to get through to Franco and explain the bizarre situation that he’s in. As GH viewers know, Franco has just glanced at himself in a mirror and was seriously unnerved. Since he’s now a 2012 version of Drew, he expected to see Jason’s face in the mirror, and seeing a completely different face is going to alarm him.

It appears that Franco’s (which is actually Drew’s) first instinct is going to be to escape. He’ll decide that he’s heard enough from his supposed wife and another man who claims to be him, and he’ll try to bolt from the room. But Drew will physically stop him from leaving, as GH previews show him telling Franco that he’s not going anywhere.

It will be interesting to see exactly what Franco is so anxious to speak to his superior officer about, which is something that nobody has asked him yet. Does it have to do with Shiloh? Given Shiloh’s recent flashback with Drew during Drew’s Afghanistan era, it seems likely that Franco could reveal Shiloh’s treasonous actions and really open a big can of worms for the former cult leader.

Of course, the first order of business will be to make sure that Franco is healthy, and to give him some sense of what’s happened to him, but at some point it seems that Drew would point Robert in the direction of his old memories about Shiloh, which Franco now has. It’s convoluted, but Franco could now be the key to some real legal trouble – and even the death penalty – for Shiloh.