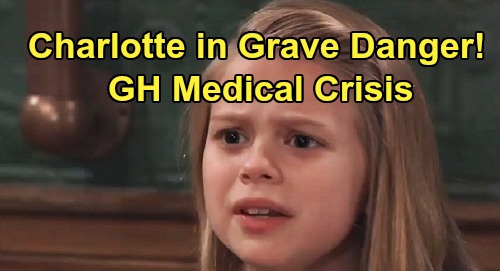 General Hospital (GH) spoilers tease that a Cassadine crisis is coming up, but it won’t involve the one you might expect. GH fans know there’s been plenty of talk about Nikolas Cassadine (last played by Nick Stabile) lately. A Cassadine battle definitely seems to be brewing, but Valentin Cassadine (James Patrick Stuart) will have more pressing problems to deal with. What he loves most will be in jeopardy!

Of course, we’re talking about Charlotte Cassadine (Scarlett Fernandez). Charlotte is the only person who loves Valentin unconditionally – and her papa feels the same way about her. Nina Reeves (Cynthia Watros) and Lulu Spencer (Emme Rylan) love Charlotte to the moon and back as well. Charlotte is a bright spot in all their lives, but it looks like things could briefly get dark.

On November 8, we’ll see the calm before the storm. General Hospital spoilers say Charlotte will enjoy an evening with Lulu and Maxie Jones (Kirsten Storms). They’ll all grab some dessert together, so that sounds nice enough. However, this girls’ night could eventually turn into a total disaster!

During the week of November 11-15, some disturbing drama will hit. General Hospital spoilers say Valentin will receive a phone call that terrifies him. Meanwhile, Nina will fly into a panic. Lulu will fall to pieces as well, so it’s easy to put all this together and assume Charlotte will be in danger. She’s the glue binds Valentin, Nina and Lulu – and the one thing they’d all freak out over.

Later, Valentin and Lulu will try to set aside their differences. That’s another great reason to believe Charlotte will be the one in crisis mode. If Lulu and Valentin are going to find common ground, it’s only going to be over their daughter. They can never agree on anything except that Charlotte should be loved and cared for.

Since it’s safe to assume Charlotte will land in some peril, we can speculate on what kind of peril that might be. Here’s where some other interesting GH spoilers could come into play. Jason Morgan (Steve Burton) will pay Valentin a visit while he’s tackling this apparent Charlotte chaos. Peter August (Wes Ramsey) is Jason’s focus right now, so that could be a clue that Peter’s involved.

Other General Hospital spoilers have pointed to looming danger for Lulu. That makes sense considering she’s Maxie’s best friend. If Lulu starts getting too close to the truth, Peter may decide it’s time to take action. Charlotte will be hanging out with Lulu and Maxie just before this nightmare goes down. Could she get caught in a trap set for Lulu?

If so, Peter will definitely want to watch his back! Even harming Charlotte inadvertently could put Peter at the top of Valentin’s hit list. If Jason is bringing Valentin into this, he may have some suspicions about what happened. It’s clear that Peter’s mess is going to get bigger in the weeks ahead.

Charlotte could find herself poisoned from a dessert meant for Lulu or perhaps physically injured in some way. Even if this is just a plain old accident, Charlotte may face a shocking medical crisis at GH. Will Charlotte’s ordeal make Nina rethink her plan to manipulate Valentin? We’ll give you updates as other news comes in. Stay tuned to the ABC soap and don’t forget to check CDL often for the latest General Hospital spoilers, updates and news.