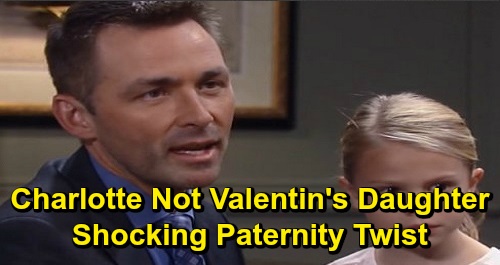 General Hospital (GH) spoilers tease that the ABC soap could be gearing up for a massive twist. GH fans have already been grumbling about how Valentin Cassadine (James Patrick Stuart) always seems to win. Nina Reeves (Cynthia Watros) is pretty wishy-washy as far as this revenge scheme goes. Nikolas Cassadine (Marcus Coloma) has also made mistake after mistake, which appears to have given Valentin the upper hand as we head into this portrait bidding war.

If you’re wondering who will win that bidding war, it’s indeed Valentin. Jax will find himself out of the game once Nina pulls him aside. That’ll leave Valentin and Laura Webber (Genie Francis), who’ll be willing to pay up to $500,000 for this eerie painting. Everyone’s after the codicil contained inside, but they have to purchase the portrait to have any hope of getting to it.

General Hospital spoilers say the drama will rev up as the final bids come in. Valentin will manage to emerge victorious, which will lead to a very public celebration at the gallery. It’s just more of the usual for Valentin. He’s always getting away with his crimes and finding ways around disasters. However, there may be one catastrophe brewing that Valentin can’t stop.

Shortly after Valentin scores the portrait, he’ll get a phone call that leaves him unnerved. Valentin will realize a love one is facing a scary crisis. It seems Nina will still be at the gallery, so it’s doubtful it’ll be her. Charlotte Cassadine (Scarlett Fernandez) is the only loved one left for Valentin to care about, so she’s the most likely candidate.

This could tie in with some other hints that GH has been dishing out. General Hospital keeps bringing up Claudette Beaulieu (Bree Williamson) and the story of how Charlotte came into existence. As many times as they’ve brought it up and as much time they’ve spent dwelling on it, this has to be important.

Now we have to think about what would truly crush Valentin. What would destroy his world like nothing else? It’s not losing Wyndemere, his fortune or even Nina. It’s losing the apple of his eye – his sweet “ma petite.” Is General Hospital about to rewrite history again? Will Valentin be devastated to learn Charlotte isn’t his daughter after all?

That would certainly be a cruel twist of fate after what happened with Nina and Sasha Gilmore (Sofia Mattsson). Imagine if this little girl Valentin has come to love as his own isn’t really his! Changing Charlotte’s paternity would open up a lot of interesting story possibilities – starting with the mystery of who her real father is.

Of course, it’s possible Valentin already found out the truth after bonding with Charlotte and has taken steps to keep it a secret. Whatever the case, it’s clear that Claudette and Charlotte are going to be crucial parts of the plot moving forward. This could bring the ultimate downfall for Valentin, so don’t miss what’s in store. We’ll give you updates as other GH news comes in. Stay tuned to the ABC soap and don’t forget to check CDL often for the latest General Hospital spoilers, updates and news.