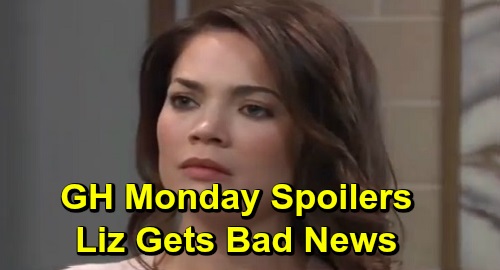 General Hospital (GH) spoilers for Monday, December 16, tease that Laura Webber (Genie Francis) will have some important news to pass along. It looks like she’ll fill Lulu Spencer (Emme Rylan) in on her suspicions regarding Charlotte Cassadine (Scarlett Fernandez). After Laura heard about Charlotte’s “secret bodyguard,” she assumed Charlotte had conjured him up as a way to deal with possible PTSD.

Laura will probably just want Lulu to be aware and give Charlotte some extra attention. They’ll likely agree that Charlotte may need more support than they thought. Later, Charlotte will greet Lulu and Dustin Phillips (Mark Lawson) at the Metro Court. She’ll grin and ask if they’re going to have a sleepover, so that should bring a few awkward moments.

Over with Andre Maddox (Anthony Montgomery), he’ll have some updates on “Drew Cain” aka Franco Baldwin (Roger Howarth). Andre will admit that before “Drew” went under, he signed a DNR order. Cameron Webber (William Lipton) and Elizabeth Baldwin (Rebecca Herbst) will be concerned about losing Franco if things take a turn for the worse.

Fortunately, Franco will indeed awaken soon – but will he be “Drew” or back to his old self? General Hospital spoilers say Franco will face devastation later in the week, so it seems he’ll be Franco again and will learn about the real Drew Cain’s (Billy Miller) death. For now, Liz and Cam will anxiously await Franco’s fluttering eyes.

At the gallery, Ava Jerome (Maura West) will gear up for that auction she’s been planning. Nina Reeves (Cynthia Watros) will be on hand as they prepare for what’s in store. After Ava presumably mentions something about their takedown efforts, Nina will raise her glass and “cheers to that.” Curtis Ashford (Donnell Turner) will overhear Nina and wonder what exactly she’s toasting to. He should start to suspect there’s more to the story here.

Other General Hospital spoilers say Jasper “Jax” Jacks (Ingo Rademacher) will lash out at Nikolas Cassadine (Marcus Coloma). He’ll tell Nik to stop interrupting him so he can make it happen. Jax may suggest that Nikolas needs to sit down, shut up and let him take care of this portrait situation. Nik has a tendency to make things worse, so Jax won’t want him anywhere near that gallery.

Afterward, Valentin Cassadine (James Patrick Stuart) will be ready to drop some serious money on this painting. He’ll spot Jax before the auction and declare that they should let the best man win. However, Laura will also arrive to make this an interesting bidding war. GH fans can expect this to turn into a pretty messy event!

Anna will probably promise she believes Peter, but doubts should linger in the back of her mind. It sounds like some hot drama’s brewing in Port Charles, so stay tuned. We’ll keep you posted as other GH details emerge. Stick with the ABC soap and don’t forget to check CDL often for the latest General Hospital spoilers, updates and news.