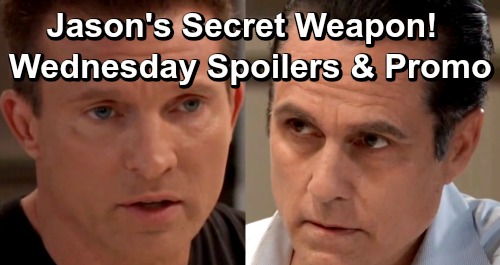 General Hospital (GH) spoilers for Wednesday, June 19, tease that Hamilton Finn (Michael Easton) will hope to have a chat with Kevin Collins (Jon Lindstrom). When Laura Webber (Genie Francis) realizes Finn wants to talk to Kevin, she’ll wonder what this is about. It most likely ties in with Ryan Chamberlain (Jon Lindstrom), who had his kidney stolen and has been locked away at Pentonville.

There might be some loose ends to tie up regarding the plot they all took part in. Then again, this may have something to do with Ryan’s recovery. Whatever the case, Kevin won’t care about his brother’s well-being. He’s washed his hands of Ryan, so there’s nothing that would make Kevin sympathetic.

Meanwhile, Michael Corinthos (Chad Duell) will head over to Sonny Corinthos (Maurice Benard) and Carly Corinthos’ (Laura Wright) place. He’ll wonder if the DA has evidence that could convict Shiloh Archer (Coby Ryan McLaughlin). Of course, Margaux Dawson (Elizabeth Hendrickson) is no longer the DA and that could change things.

Besides, Shiloh always seems to wiggle out of trouble whether there’s evidence or not. He recently got Harmony Miller (Inga Cadranel) to take the fall for him, so he won’t be headed to Pentonville anytime soon.

On the bright side, Jason Morgan (Steve Burton) will have some news that could help with Shiloh’s takedown. He’ll likely mention the details Margaux gave him and hope this could be their secret weapon. Jason may have done some digging into that DoD overdose offscreen.

Other General Hospital spoilers say Josslyn Jacks (Eden McCoy) will lash out at Lulu Falconeri’s (Emme Rylan) robber. As she calls 911, Joss will contend that he’d better pray the cops get there before her stepfather does! However, Sonny just might be the only one who will defend this burglar. That’s because he’s Dev (Ashton Arbab), the same teen who helped Sonny out in Turkey.

It seems Dev was keeping tabs on the place and decided to help himself to Lulu’s stuff since she sent the guard away. Dev’s the kind of kid who gets by any way he can, so Sonny may cut him some slack. Joss, on the other hand, may be harder to win over.