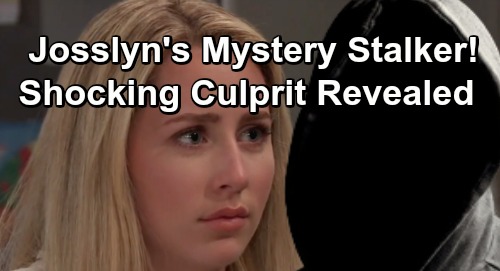 Josslyn didn’t see anything, but we know someone was lurking nearby. GH fans saw a glimpse of what this mysterious person saw, but who was the one gazing at her through the window? Since the music was a tad eerie, it certainly wasn’t Oscar. General Hospital portrayed Oscar as this angelic being of light at the Nurses Ball, so they aren’t about to turn him into a ghostly peeping Tom now.

It seems likely that Josslyn’s mystery stalker is actually Dev (Ashton Arbab), the teen who helped Sonny Corinthos (Maurice Benard) with his mission in Turkey. Dev played a crucial part in Sonny’s efforts to find Dante Falconeri (Dominic Zamprogna). Sonny will soon have the chance to return the favor since Dev will surprise him on June 20.

Of course, we’ve got some drama to play out first. Josslyn may be convinced that Oscar wants to speak with her. That could be why Carly Corinthos (Laura Wright) pushes Joss to get some counseling on June 18. She might feel like her poor daughter’s losing it if she gets stuck on this idea.

However, Josslyn could start to fear something else is going on. She’ll grow increasingly anxious, which could mean she’ll suspect this is more than just Oscar’s spirit out there. If Josslyn relays her fears, Carly may feel like Joss’ grief has left her on edge and made her paranoid. She might encourage Josslyn to focus on healing and put any troubling thoughts out of her mind.

If this indeed Dev, it could fuel Josslyn’s initial distrust of him. General Hospital spoilers say Josslyn may not respond well to the teen right away, which is understandable since he’s apparently been skulking around! Joss may confront Dev over his creepy behavior, but he was probably just curious about the people in Sonny’s life and trying to figure out how to make his entrance.

Fortunately, Josslyn and Dev should bond in time – especially since Sonny will want Dev to keep an eye on her. General Hospital spoilers say Cameron could get jealous sooner or later, so it’ll be interesting to see where this possible love triangle goes next. We’ll give you updates as other GH news comes in. Stay tuned to the ABC soap and don’t forget to check CDL often for the latest General Hospital spoilers, updates and news.