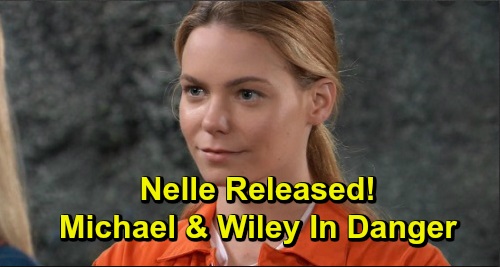 General Hospital (GH) spoilers tease that Nelle Benson (Chloe Lanier) could be well on her way to getting out of Pentonville. GH fans know Nelle pulled off the first phase of her plan with her prison bestie, Ryan Chamberlain (Jon Lindstrom). Ryan’s meticulous when it comes to his violent handiwork, so he was able to come dangerously close to nicking Nelle’s kidney and make it look like a real crisis.

Nelle got her hands on a phone at GH and called up Martin Gray (Michael E. Knight). She told “Marty” it was his favorite client on the line – and he wouldn’t believe where she was! Martin may soon be forced to admit this was a pretty good plan. It at least gives Nelle a shot at proving she’s in danger at Pentonville and scoring an early release. After all, they’re giving some of those out anyway.

General Hospital spoilers say Nelle will remain determined to get out one way or another. Carly Corinthos (Laura Wright) got riled over the fact that Nelle’s injuries weren’t life-threatening. She didn’t think it was fair that Nelle was alive and well while Lucas Jones (Ryan Carnes) is fighting for his life.

That could be a hint about the resentment still to come. Can you imagine how furious Carly will be if Nelle actually gets released early? She’ll probably on a similar rant about how Sam McCall (Kelly Monaco) is still stuck behind bars while someone like Nelle’s roaming free.

Of course, Carly should also grow concerned about any tricks Nelle might have up her sleeve – and we all know Nelle’s always got a few of them! Michael Corinthos (Chad Duell) has been stepping up for “Wiley Cooper-Jones” (Erik and Theo Olson) lately, which Nelle isn’t going to like one bit. You can bet Nelle will make it her business to keep Michael as far away from “Wiley” as possible.

Nelle might threaten Brad Cooper (Parry Shen) and push him to keep Michael away from his godson, who’s actually Michael’s biological child. The whole point of this swap was to keep Michael and his family away from Jonah Corinthos. Nelle wanted to make them suffer since she was headed to prison anyway. The fact that Michael’s getting too close to “Wiley” will irritate her.

Nelle’s not going to like Sasha Gilmore (Sofia Mattsson) and Willow Tait (Katelyn MacMullen) playing tag-team Mommy either! It’s safe to say Nelle’s rage will bubble up – and Nelle does dangerous things when she’s angry. General Hospital spoilers suggest a real war could be brewing between Nelle and her enemies. A Nelle vs. Carly matchup could be the most entertaining part of all that.

It sounds like some exciting drama’s ahead in Port Charles. We’ll give you updates as other GH news comes in. Stay tuned to the ABC soap and don’t forget to check CDL often for the latest General Hospital spoilers, updates and news.