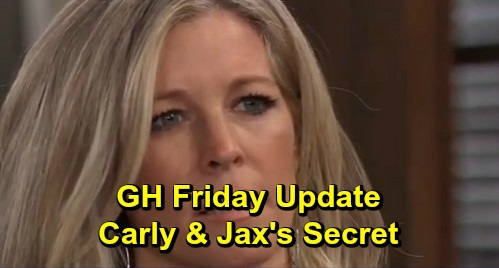 General Hospital (GH) spoilers update for Friday, December 13, teases that Sonny Corinthos (Maurice Benard) will blow up over Carly Corinthos’ (Laura Wright) deception. Carly will look rattled as Sonny flies off the handle and accuses her of lying with Jasper “Jax” Jacks (Ingo Rademacher) for weeks. Sonny may not know exactly what Carly’s been lying about, but he’ll certainly be agitated about it.

It’s possible Sonny will somehow figure out the truth about Nikolas Cassadine’s (Marcus Coloma) survival. If not, Sonny could pressure Carly to tell him what she’s been hiding. Either way, Carly will be on the hot seat in Friday’s episode. She’ll have to think fast and give Sonny a reasonable explanation for her deception.

Speaking of deception, Peter August (Wes Ramsey) will keep lying to protect himself. GH fans know Peter was behind the hired gun that showed up to take out Andre Maddox (Anthony Montgomery) and Franco Baldwin (Roger Howarth). He ultimately stopped the hitman, but the point is none of it would’ve happened without Peter’s orders.

Elizabeth Baldwin (Rebecca Herbst) will express her deep gratitude to Peter on Friday. She’ll be glad Peter was in the right place at the right time, but Peter will suggest he only did what he had to do. General Hospital spoilers say Peter will continue to be hailed as a hero instead of a murderer.

Once Jason Morgan (Steve Burton) hears about Peter stepping up for Franco, it could raise more suspicions. Whatever the case, Jason will find Anna Devane (Finola Hughes) and share his concerns. He’ll make it clear that Peter’s the reason Sam McCall (Kelly Monaco) went to prison. Jason will blame Peter for the series of events that ultimately put Sam behind bars and caused her kids to suffer.

Anna may think Jason’s allegations are a bit extreme without proof, but Jason will be convinced that Peter’s guilty. He may not have hard evidence yet, but he could reignite his fight to get it. Over with Curtis Ashford (Donnell Turner), he’ll sit down and strategize with Laura Webber (Genie Francis). Curtis will think they have to look a little closer to home, so this probably involves their search for the missing portrait.

However, Laura and Curtis won’t have any luck. Ava Jerome (Maura West) is in cahoots with Nina Reeves (Cynthia Watros), and they have big plans for that codicil-concealing painting. Of course, Nina and Ava will have to be careful. Carly will grow suspicious of Ava on Friday – and we all know how Carly loves to meddle!

As for Nina, she may wonder if Jax can be trusted. Jax will talk about a possibility Nina must be troubled by. Will Nina broach the topic of Nik possibly being alive to see how Jax reacts? That’s one option to consider. Then again, it may be Jax who’s on a fishing expedition. He might try to figure out how much Nina’s in the loop on at this point.

Other General Hospital spoilers say Charlotte Cassadine (Scarlett Fernandez) will whisper to someone through a fence. She’ll insist she knows who this person is, so it’ll probably be Nikolas. Charlotte saw Nik’s picture when she was scrolling through Lulu Spencer’s (Emme Rylan) phone. She may have cracked the case by now, which could leave Nikolas in a tight spot.

Later, Nina will be appalled by something she learns. Will Charlotte confess the “secret bodyguard” story and point the finger at Nik? Nina would definitely be appalled to know Nikolas got that close to Charlotte, who she loves dearly. She won’t want Charlotte caught in the middle of this war, so she may take steps to protect her.