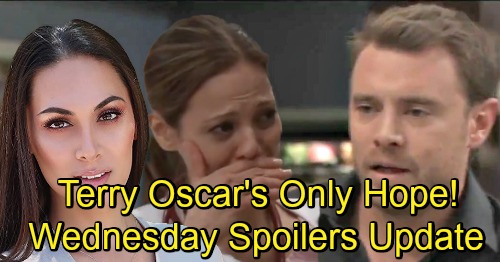 General Hospital (GH) spoilers update for Wednesday, September 5, tease that Josslyn (Eden McCoy) will get some jaw-dropping news. Oscar (Garren Stitt) will fill Joss in on his situation over the phone. He’ll suggest that she shouldn’t panic, but he’s in the hospital. Josslyn will face serious concerns anyway, so she’ll get over to GH as fast as she can.

Elsewhere, Cameron (William Lipton) will deal with his mom’s questions. Liz (Rebecca Herbst) will try to figure out what Cam and Joss were doing together. Cameron will mention that he was helping Josslyn out with her anniversary decorations. He’ll most likely leave out the part about their forbidden kiss!

Josslyn will end up visiting Oscar soon enough. He’ll insist that he’s OK, but that’s not really the case. On Wednesday, General Hospital spoilers say Kim (Tamara Braun) will be confronted about her son’s condition. Drew (Billy Miller) will realize something’s terribly wrong, so he’ll encourage Kim to spill it.

Kim will ultimately divulge the secret she’s been keeping. It appears Oscar’s got a brain tumor, so that should certainly worry Drew. Kim will add to his fears when she reveals that Oscar’s dying. Drew will think there must be a way to help him, but Kim will feel like they’re running out of options. Terry might be the only one who can save Oscar’s life.

Across town, Finn (Michael Easton) will extend an olive branch. After Chase (Josh Swickard) drops by to deliver important updates, Finn will urge him to stay. They’ll manage to talk a bit and inch toward the connection Chase longs for. It’s all about baby steps for these brothers!

Other General Hospital spoilers say Kristina (Lexi Ainsworth) will get a shock. Alexis (Nancy Lee Grahn) will believe she’s come up with the ideal career path for her daughter. Kristina will have her doubts, but she’ll anxiously await Alexis’ thoughts on the matter. Sam (Kelly Monaco) and Sonny (Maurice Benard) will be just as curious about what Alexis is considering.

While Kristina and her family debate her future, Anna (Finola Hughes) will try to make amends with Peter (Wes Ramsey). These two got off to a rocky start, but Anna will hope time has healed at least a few wounds. She’ll do her best to make progress with Peter, but he’ll be reluctant to open his heart.