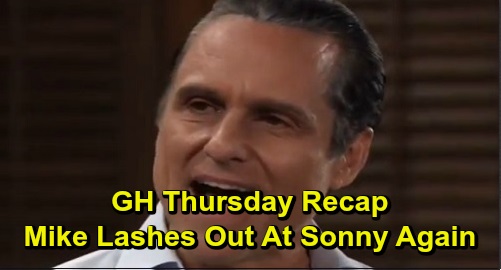 General Hospital (GH) spoilers recap for Thursday, December 12, reveal that Sam McCall’s (Kelly Monaco) parole hearing had taken place, which she updated Jason Morgan (Steve Burton) and Alexis Davis (Nancy Lee Grahn) about as they each visited her at Pentonville. Sam was feeling down when Alexis visited her and blamed herself for her current predicament, although Alexis argued that none of this was her fault.

Meanwhile, Michael Corinthos (Chad Duell) talked with Sonny Corinthos (Maurice Benard) about his plan to take Mike Corbin (Max Gail) to Sweden for treatment. Michael didn’t think that it was the right thing to do, but Sonny dug in his heels and insisted that the results could be promising. Michael pointed out that hanging on might not be what Mike would have wanted, and then he let the matter drop.

Over at Turning Woods, Josslyn Jacks (Eden McCoy) and Dev Cerci (Ashton Arbab) visited with Mike. Mike was in a very different place and thought he was a younger man, and that Dev was his son. It was tough for Josslyn to see Mike in such a bad way, but she and Dev pushed through and managed the visit. They were playing craps when Sonny arrived and upset Mike, who thought that Sonny was Joe Scully (Robert Miamo).

Josslyn and Dev managed to convince Mike that Sonny wasn’t Joe, and eventually Mike accepted that and accepted Sonny into the craps game. Mike and Sonny shared a laugh over Mike’s anger, and although Mike still didn’t recognize Sonny as being himself, they ended up having a decent visit. Still, it was clearly tough on Sonny. Ultimately, Mike told Sonny that he was ok and that he could come back sometime.

Next, Jason checked in with Ned Quartermaine (Wally Kurth) at the Quartermaine mansion about Sam’s parole hearing. Ned hadn’t heard anything about the parole board’s decision yet, and he advised Jason to be patient, and that the deliberations will take as long as they’re going to take. Michael arrived to see Ned next, and Ned noticed that Michael seemed to be a bit ragged. They talked and ultimately agreed that Ned would help out by picking up some of the slack at ELQ for the time being.

They also discussed the issue of Oscar Nero Quartermaine’s (Garren Stitt) ELQ stock, with Ned expressing his wish to buy Oscar’s shares from the foundation. Michael thought that perhaps Wiley Cooper-Jones (Erik & Theo Olson) should get the shares, but Ned seemed to disagree, and they decided to table the discussion for the time being.

At GH, Brad Cooper (Parry Shen) and the rest of Lucas Jones’ (Ryan Carnes) family learned that Lucas had been successfully removed from he ventilator and sedation and was breathing on his own, but that the next 24 hours would be critical. Willow Tait (Katelyn MacMullen) was on hand and did her best to comfort Brad and alleviate some of his guilt for the accident, but Brad snapped at her and nearly told her the truth about Wiley, but he noticed Julian Jerome (William deVry) standing nearby and clammed up.

Finally, Harrison Chase (Josh Swickard) assessed the situation at Pentonville where Ryan Chamberlain (Jon Lindstrom) had just stabbed Nelle Benson (Chloe Lanier). Ryan insisted that it “wasn’t what it looked like.” Nelle, on the floor, yelled at Ryan wondering why he had stabbed her, with Chase skeptical about the whole scene. Nelle was then carted off to GH.

Once she arrived at GH, Carly Corinthos (Laura Wright) saw her get wheeled by and was astonished. Turns out, after an examination, it was revealed that there was no damage to Nelle’s kidney from the stabbing, and Chase then got Nelle’s statement about the attack. Nelle said that she went into Ryan’s room to restock towels, when Ryan grabbed her and ordered her to help him escape.

She went on to say that Ryan stabbed her when she tried to get away and alert the guards, and Chase wrote it all down but seemed quite skeptical of the whole thing. Later, Nelle borrowed her guard’s cell phone to call Martin Grey (Michael E. Knight), happily telling him that he’d never guess where she was.