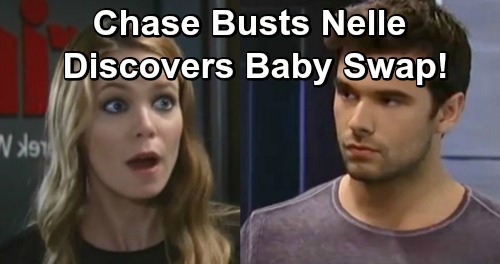 General Hospital (GH) spoilers tease that Harrison Chase (Josh Swickard) could once again destroy Nelle Benson’s (Chloe Lanier) dreams. He was behind the plot that ultimately brought her Port Charles reign of terror to an end. Nelle landed behind bars thanks to Chase’s setup, which he teamed up with Michael Corinthos (Chad Duell) on. That set up a bond that’ll be important as time goes on.

Michael is clearly into Willow Tait (Katelyn MacMullen), who’s currently falling for Chase. At the same time, it’s easy to see the strong bond Willow and Michael have. Their bereavement group meetings have really brought them together. They understand the toll a loss can take, so they’ve been helping each other cope.

However, Willow just changed the game by revealing the truth to Chase. She admitted that she couldn’t find the exact support group she needed, so the bereavement group was the next best thing. Now that Chase knows Willow gave her baby up for adoption, he has a crucial piece of the puzzle.

General Hospital spoilers say Willow will find herself increasingly drawn to Michael and “Wiley” Cooper-Jones. Whenever Michael’s hanging out with his godson, Willow may find it tough to stay away.

Chase is sure to notice eventually and that could lead to a stunning realization. He may put his detective hat on and determine that “Wiley” is the kid Willow gave up – at least that’s what she thinks.

Chase might decide he hates to see Willow in so much pain. She obviously wants a relationship with her “son,” so Chase may not see the harm. More love surrounding “Wiley” is a good thing, right? Not when Brad Cooper (Parry Shen) is keeping a baby swap bombshell under wraps!

Julian Jerome’s (William deVry) reaction to Chase’s involvement may tip him off. Chase might sense that there’s more to the story here. He could do a little digging and ultimately discover Brad traded his dead kid for a random woman’s on the side of the road. Of course, GH fans know that woman wasn’t so random. She was Nelle and that shocker will definitely shake things up.

Chase might be torn about revealing the switch to Willow. Brad and Lucas Jones (Ryan Carnes) may have reluctantly let her in “Wiley’s” life by then. She’d be devastated to learn her own son died shortly after the adoption.

Nevertheless, Chase isn’t dumb. It shouldn’t be too hard to guess that Nelle was the swapper that night. After all, she was walking with a baby on the side of the road and was friends with Brad. Chase also knows exactly what Nelle is capable of, so he could end up being her downfall once again.

Will Chase blow this case wide open? Will he tear down another one of Nelle’s schemes? We’ll give you updates as other General Hospital news comes in. Stick with ABC’s GH and don’t forget to check CDL often for the latest General Hospital spoilers, updates and news.