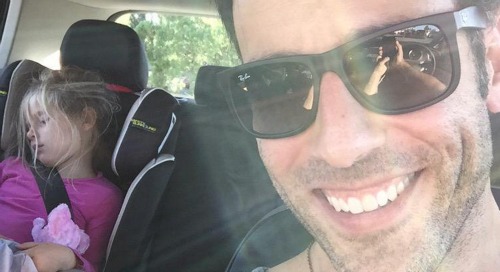 General Hospital (GH) spoilers has some fun news to pass on about a popular GH star. Coby Ryan McLaughlin, who portrays Shiloh Archer on the ABC soap, was recently interviewed in Soap Opera Digest (SOD) about various aspects of his life, as well as his role as a GH villain. During the interview, he dished about his real-life girlfriend and his role as a dad to his 8-year-old daughter Nico.

Of course, GH viewers are used to seeing Coby’s character conniving and scheming and not really having a “love life” per se or being a doting dad, but Coby himself is just a regular guy who is happily raising a little girl and dating a wonderful woman.

Regarding his girlfriend Mel, Coby relayed to SOD that the two met at a children’s birthday party. “That’s my social circle now. Remember those friends you used to have when you were young and you’d party? Yeah, now my social scene is like Target and Gymboree. I took Nico to a birthday party for one of her classmates in Malibu and I was talking to her little friend’s father and Mel, my girlfriend, walked in. I was like ‘oh, wow!’”

Coby continued: “I was asking this guy all about her, like, ‘Does she have a boyfriend?’ And he goes, ‘Man, I don’t know, she’s right there! Go talk to her!’ So I did and that was it. She’s not an actor, she’s in wealth management, and she finds [his outlandish GH antics] highly amusing.”

And the really great news is that Coby reports that “his girls” Mel and Nico get along well. “Every time I grab the kid, literally the first thing out of my daughter’s mouth isn’t ‘Hi!’ or ‘Love you Dad,’ or ‘Glad to see you,’ it’s ‘Is Mel home? Is [Mel’s dog] Lady in the car?’”

At any rate, it sounds like Coby has a nice, normal life with his daughter and girlfriend, which sounds a lot better than what his character Shiloh is facing right now, having been put in prison for some very serious crimes. Fortunately for his fans, Coby is quite active on Instagram and frequently posts about what he and Nico and Mel are up to, so check it out!