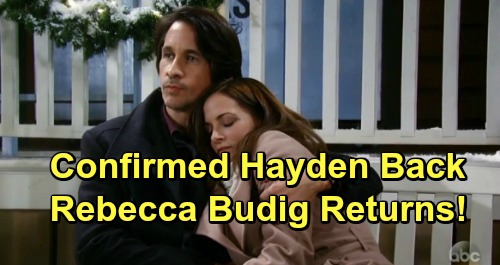 General Hospital (GH) spoilers tease that one long-awaited return is finally in the works. According to EW, Rebecca Budig (Hayden Barnes) is headed back to GH at last! Hayden was last seen onscreen in September 2017, but we’ve definitely heard mentions of her since then. She even sent Dr. Hamilton Finn (Michael Easton) a letter at one point and pushed for a meeting in Italy.

Finn decided not to go down that road since he’s currently on a new one with Anna Devane (Finola Hughes). However, General Hospital fans know Hayden’s keeping a huge secret, and it’ll undoubtedly play a major role in her comeback. Despite telling Finn she lost the baby, Hayden was pregnant when we last saw her. By now, she’s certainly raising Finn’s beautiful son or daughter.

General Hospital spoilers say Hayden will appear again starting this summer, but there’s no word on an exact airdate just yet. We’ll let you know when that becomes available, but we can look forward to this exciting storyline for now. Finn is sure to be floored when he learns he has a child with Hayden! This opens up all sorts of dramatic possibilities, including some in the romance department.

Finn’s been trying to help Anna deal with her issues, but he’ll soon have some of his own. Will Finn be pulled back in Hayden’s direction? Could Anna end up pushing Finn down that path? She may sense that there’s still a strong connection between Hayden and Finn. They were a pretty nice pairing, so that might be something GH wants to revisit.

Of course, we’ll also see Finn navigate fatherhood and all the challenges that come with it. The exposure of Hayden’s secret will bring a mess Finn never saw coming. Fortunately, it should be a good mess once Finn wraps his head around being a dad. As for Hayden, she can hopefully reconnect with Finn and some other familiar faces – like her sister, Elizabeth Baldwin (Rebecca Herbst).

Are you excited about Hayden’s big comeback? Do you hope Finn reunites with Hayden and agrees to raise the baby together? We’ll give you updates as other GH news comes in. Stay tuned to the ABC soap and don’t forget to check CDL often for the latest General Hospital spoilers, updates and news.