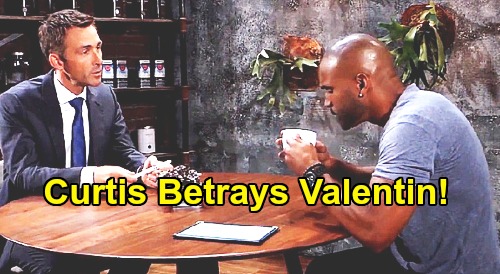 General Hospital (GH) spoilers tease that Curtis Ashford (Donnell Turner) is in an interesting position these days. He’s currently working on the sly for Valentin Cassadine (James Patrick Stuart) to dig up dirt on Jasper “Jax” Jacks (Ingo Rademacher), and so far he’s found some serious intel for Valentin. Curtis has discovered that Jax has a file on Valentin and on Cassandra Pearce (Jessica Tuck), which has Valentin worried.

But now Nina Reeves (Cynthia Watros) has joined in the fun and decided that Curtis should secretly share all of the information he turns up on Jax with her. It’s starting to be a convoluted mess for Curtis, and we have to wonder exactly where his loyalties lie.

Well, to start out, Curtis’ loyalties were directed at the person dangling lots of cash in front of him, which was Valentin. As GH viewers know, Curtis and Jordan Ashford (Briana Nicole Henry) are currently strapped for cash due to her astronomical medical bills resulting from her kidney transplant surgery. But we have to wonder what Curtis really has in mind at this point.

After all, Curtis has never really trusted Valentin, and he was never keen on working for him in the first place. Curtis very reluctantly helped Valentin bring Sasha Gilmore (Sofia Mattsson) to Port Charles and into Nina’s life. But as GH viewers know, Valentin tricked Curtis into believing Sasha was Nina’s daughter.

Given Curtis’ stoic and serious demeanor lately, we can’t help but wonder whether Curtis plans to double-cross Valentin and ultimately let Jax know what the evil Cassadine is up to. Of course, he probably won’t come right out and tell Jax what Valentin is doing, but he might arrange things for Jax to “discover” how Valentin is digging into his life.

After all, Curtis has a pretty strong moral compass, and he would probably not be able to live with himself if he contributed to harm coming to a relatively upstanding guy like Jax.

Plus, there could be a bomb dropping soon about Sasha’s true identity (i.e., that she’s not really Nina’s daughter), and when Curtis finds out that he unwittingly helped dupe Nina, he’s going to be peeved at Valentin.

At any rate, we think there’s a more interesting story brewing here than Curtis simply digging for information on Jax. And once the whole Sasha deception is revealed, Curtis is going to have a big reason to get back at Valentin, and we bet that Jax will have something to do with that.

What do you think? Is Curtis going to cross Valentin? Stay tuned to the ABC soap and don’t forget to check CDL often for the latest General Hospital spoilers, updates, and news.