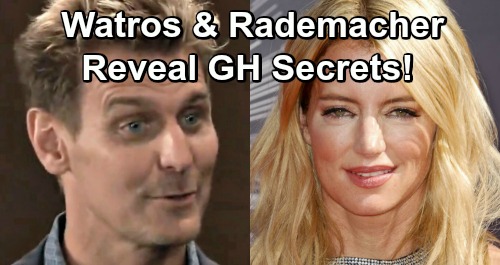 General Hospital (GH) spoilers tease that fans are preparing themselves for Michelle Stafford’s onscreen departure as Nina Reeves. They’re also gearing up for Cynthia Watros’ upcoming debut as the new Nina. Watros has received plenty of praise as a recast choice, but how did her involvement with GH come about? She shared a little more about that in an interview with TV Insider.

Before we get to that, it’s important to point out that Watros is no stranger to soaps. She made quite a name for herself playing Annie Dutton on Guiding Light, which she won a Daytime Emmy for in 1998. Watros also had a brief stint as Vickie Hudson McKinnon on Another World and portrayed Kelly Andrews on The Young and the Restless from 2013-2015.

Watros has also done lots of primetime work, but she’s a name that daytime TV never forgot. That’s why GH hoped to snatch her up after Stafford made the decision to leave. The answer to how Watros came on board is simple: the show reached out by dialing her number.

“It was a regular day and I got a phone call just asking if I’d ever be interested in going back to daytime, if I wanted to go to General Hospital,” Watros said. “I did some research on Nina and what the character was about, and I said I would love to.”

Of course, GH viewers can tell that a new love story’s brewing between Nina and Jasper “Jax” Jacks (Ingo Rademacher). Rademacher took part in this interview as well, which serves as further proof they’ll be sharing tons of screen time in the coming months. When asked about that, Rademacher simply said that “you would assume so.”

As for Rademacher’s return to daytime, that came about in a more unusual way. It turns out Rademacher was applying to become an L.A. County lifeguard last year, so he had some paperwork to fill out and references were needed. Rademacher texted Frank Valentini, General Hospital’s executive producer, in hopes of putting his name down.

That led to Valentini asking how things were going at Rademacher’s last soap home, The Bold and the Beautiful. Rademacher played Thorne Forrester over there for a while, but he ultimately parted ways with the show on good terms. Once Valentini found out Rademacher was available, he texted him again a month later or so and asked if Rademacher would like to return to GH – either for a long or short run.

“I said, ‘I’d love to come back…as a permanent.’ And boom! There we go. I went back,” Rademacher explained. The timing worked out great since Nina’s relationship with Valentin Cassadine (James Patrick Stuart) is on the verge of destruction. General Hospital spoilers say their romance is bound to crumble after the truth about Sasha Gilmore (Sofia Mattsson) comes out, so Jax can heal Nina’s broken heart.

Are you excited about Cynthia Watros’ upcoming debut? Are you rooting for Nina and Jax as a couple? We’ll give you updates as other GH news comes in. Stay tuned to the ABC soap and don’t forget to check CDL often for the latest General Hospital spoilers, updates and news.