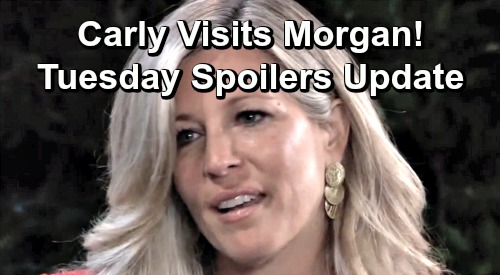 General Hospital (GH) spoilers update for Tuesday, June 4, tease that Dr. Hamilton Finn (Michael Easton) will deliver updates on Ryan Chamberlain (Jon Lindstrom). He may fill everyone in Ryan’s seizure, which is set to happen thanks to that shocking injection. A wide-eyed Ryan will convulse as he fears death is near. The ordeal will leave Ryan rattled, which is good news for Jordan Ashford (Briana Nicole Henry).

Jordan suggest she’s got so much to tell someone in Tuesday’s episode. T.J. Ashford (Tajh Bellow) will likely be the person she’s speaking to. We know Jordan and T.J. will indeed share some heartbreaking moments soon. General Hospital spoilers say Jordan should speak with Curtis again, too. She’ll want to make sure nothing’s left unsaid since she believes she’s going to die.

Curtis will tell Stella Henry (Vernee Watson) how grim the situation’s becoming, but she’ll hold out hope for Jordan’s future. That’s because Stella will think she can turn things around. She’ll head in Ryan’s room once his doctors deal with his seizure. Stella will insist she’s not leaving until Ryan agrees to give up a kidney, so it sounds like he’d better shut up and listen.

GH fans know Ryan wants to be remembered. He hopes his gruesome crimes will leave his mark on the world, but Dr. Kevin Collins (Jon Lindstrom) warned that wouldn’t be the case. Kevin feels like Ryan will become a footnote instead of leaving behind a significant story.

On Tuesday, Stella will play up that angle as well. Ryan’s just another serial killer if he doesn’t do something truly memorable – like cap off his many murders by saving one life. Since Ryan won’t want to be forgotten, he’ll ultimately agree to the kidney transplant.

However, Jordan will be fading fast. There’ll still be concerns about whether Jordan will make it, but she’ll pull through in the end. Meanwhile, Franco Baldwin (Roger Howarth) will catch up with Elizabeth Baldwin (Rebecca Herbst). He’ll note that the ends justify the means, which might have something to do with Ryan’s seizure and the mysterious intruder who caused it.

Since this seizure will leave Ryan in a fragile place, it’ll be part of why he agrees to hand over a kidney. As long as Jordan’s life is saved, Franco may not care how it happened. As for who that mysterious intruder might be, Kevin could’ve ordered someone to do it. He was heard on the phone declaring it was “better this way,” so he may have been doing whatever he had to do to help Jordan.

Other General Hospital spoilers state that Josslyn Jacks (Eden McCoy) will remain in a dark place. Fortunately, Cameron Webber (William Lipton) will make it a little brighter. He’ll lift Joss’ spirits as she continues to cope with losing Oscar Nero Quartermaine (Garren Stitt). They’ll chat about music and how it sometimes has the power to convey what words can’t.

Cameron may think Josslyn should keep pouring her heart into new music and use that to power through her grief. Since they’re both talented in that area, this may be something they’ll keep bonding over in the months ahead.

Elsewhere, Carly Corinthos (Laura Wright) will be distraught over something. She just won’t know what to do about it, so she’ll turn to Sonny Corinthos (Maurice Benard) for support.

Carly’s been awfully worried about her pregnancy, so that may be the topic of conversation again. She’s had nagging concerns that her baby won’t be OK, but Sonny will offer reassurance. Even so, Carly will need a little extra love on Tuesday. General Hospital spoilers say she’ll hope to find it by going to the cemetery and trying to feel close to Morgan Corinthos (Bryan Craig).

It looks like some gripping scenes are ahead. We’ll keep you posted as other GH details emerge. Stay tuned to the ABC soap and don’t forget to check CDL often for the latest General Hospital spoilers, updates and news.