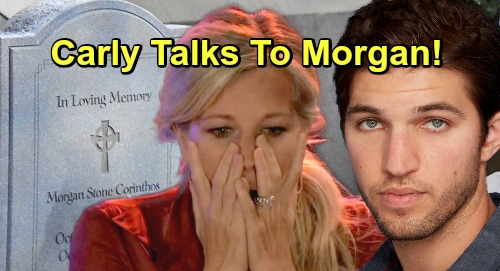 General Hospital (GH) spoilers tease that Carly Corinthos (Laura Wright) will remain excited about her impending bundle of joy. She’ll want to share that excitement with one family member who’s already passed on. Carly will head to the cemetery for a visit with her deceased son. She’ll want to talk to Morgan Corinthos (Bryan Craig) about the baby and perhaps express some of her growing fears.

Carly’s tests have brought positive results so far. No serious issues have been found, so Carly has every reason to be hopeful – and part of her is. However, another part of Carly can’t shake the feeling that something will go wrong. Whenever a character has a hunch like that, GH fans should pay attention to it. You can count on it to mean something down the road.

Of course, almost any soap pregnancy comes with complications. There are always going to be a few scares along the way, but many General Hospital moms get a happy, healthy child eventually. Is that really in the cards for Carly and Sonny Corinthos (Maurice Benard) though? From the start, this has been a weird storyline. There’s seemingly no reason for GH to give Carly and Sonny another kid.

Sonny and Carly are a little old for this storyline if we’re being honest. It would’ve made more make more sense to give one of the younger couples a surprise pregnancy. Sonny already has Avery Corinthos (Ava and Grace Scarola) and Carly is her devoted stepmom. What’s the point of putting another child in the Corinthos clan mix? Since there doesn’t seem to be one, perhaps the point is only the outcome.

If Carly’s worried, we have to listen to her instincts. We mentioned that Carly will talk to Morgan at his grave. General Hospital spoilers say those scenes will air on June 4. Carly may admit she’s already fallen in love with her little one. She might open up to Morgan about fearing she’ll lose the baby just like she lost him.

GH may be setting up a scenario where the family will be crushed by the loss and ultimately elated by Jonah Corinthos’ survival. We can’t forget that Michael Corinthos (Chad Duell) doesn’t know “Wiley Cooper-Jones” is actually his son. General Hospital may set the stage for the big reveal through a truly tragic loss.

It sounds like “CarSon” will have quite a crisis in their future. We’ll give you updates as other GH news comes in. Stay tuned to the ABC soap and don’t forget to check CDL often for the latest General Hospital spoilers, updates and news.