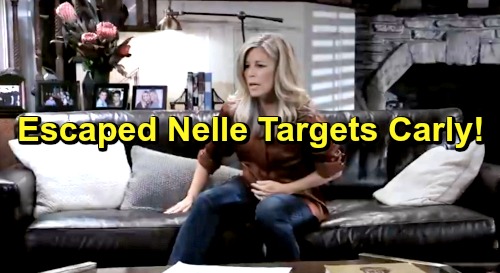 General Hospital (GH) spoilers tease that Nelle Benson (Chloe Lanier) has a great escape coming up. She’ll find herself on the loose in Port Charles, so what does that mean for the enemies she left behind there? You can bet some kind of trouble’s looming. That’s always the case when Nelle’s involved!

Of course, there’s even more of a risk to the Corinthos clan now that they’re adding to their brood. GH fans know Carly Corinthos (Laura Wright) is pregnant, and she’s been quite concerned about her little one. She can’t help but feel like something’s bound to go wrong, so her worries are probably warranted. Whenever a soap character fears the worst, the worst almost always happens!

Nelle is definitely the worst – at least in the eyes of Carly, Sonny Corinthos (Maurice Benard), Michael Corinthos (Chad Duell) and Harrison Chase (Josh Swickard). They should all be on edge after they learn Nelle’s made a quick getaway. This isn’t their first rodeo with Nelle Benson. She’s a dangerous woman, so Michael and the others should know a storm could be brewing.

There’s always a possibility Nelle will kidnap “Wiley Cooper-Jones” while she’s out of prison. However, General Hospital could have Nelle target Carly instead of or perhaps in addition to that plot. After all, Nelle has had plenty of time to think about her revenge behind bars. She’s likely dreamed up about a million ways to give Carly what’s coming to her.

Once Nelle finds out Carly is pregnant, she may be even more motivated to seek vengeance. Nelle felt she had no choice but to give up her baby because of Carly and her family. She was going to be separated from Jonah Corinthos anyway, so she handed over him to Brad Cooper (Parry Shen). Nelle refused to let Michael and the rest of the Corinthos crew get their hands on her child.

If Nelle can’t have her kid, why should Carly have hers? That may be the mentality she has soon enough. Will Nelle cause some sort of altercation that results in a miscarriage? When Nelle was pregnant, she tumbled down the stairs after a confrontation with Carly. Nelle might want Carly to go through the same thing.

Then again, there are other ways for Nelle to wreak havoc. The stress of Nelle’s escape alone could cause issues. General Hospital spoilers say Nelle’s getaway poses some major risks, so stay tuned to see all the drama ahead. We’ll give you updates as other GH news comes in. Stick with the ABC soap and don’t forget to check CDL often for the latest General Hospital spoilers, updates and news.