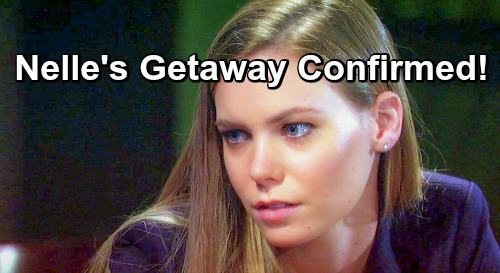 General Hospital (GH) spoilers tease that Nelle Benson (Chloe Lanier) will return to the ABC soap. She’ll be back in action during the week of June 3-7, so GH fans should expect some fun scenes. First, Nelle will interact with Brad Cooper (Parry Shen). It looks like Nelle may land at the infirmary, presumably after faking some medical issue. That could lead to Brad’s surprise visit.

Of course, there’s a chance this medical issue could be real, but when is anything ever real with Nelle? Other than her pregnancy of course. That was the one thing she didn’t lie about, so she’ll be quite curious about “Wiley Cooper-Jones” aka Jonah Corinthos. General Hospital spoilers say Nelle will look at a picture of her son and gush over him. Will Brad admit there’s been a baby swap snag?

If so, that could certainly leave Nelle concerned about Shiloh Archer (Coby Ryan Laughlin) the cult leader. Even crazy fiancé killers like Nelle have standards! However, it’s also possible Brad will avoid making a bigger mess of things. He knows Nelle is a wildcard, so we’ll see how much Brad chooses to reveal.

It’s worth mentioning that Nelle’s medical issue – fake or not – probably won’t be serious. She’ll look perfectly fine and stand on her own two feet while talking to Brad. Still, Nelle could pretend to take a turn for the worse and try to score herself a trip to GH. Transportation to and from a prison always provides an opportunity for a soapy escape.

General Hospital spoilers say Nelle will indeed make a quick getaway during the week of June 10-14, but she may not do it alone. Nelle will form a friendship with someone who might be able to help. It might be someone she crosses paths with in the infirmary or at GH if she lands there. Nelle could do some of her usual manipulating and get this person on her side.

Then again, Nelle could be returned to her cell and get a more traditional prison visit later. It could be someone we’ve met or perhaps a new character thrown in for the sake of this plot. Either way, Nelle will somehow orchestrate her big escape and cause chaos in the process.