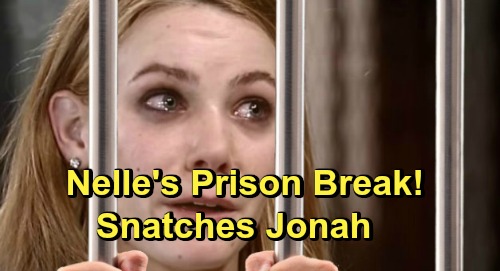 General Hospital (GH) spoilers tease that Nelle Benson (Chloe Lanier) will stir up more trouble. During the week of June 10-14, Nelle will return for more drama. It turns out she’ll hit it off with someone and form a new friendship. Uh-oh. That can’t be good news for the people of Port Charles!

GH probably wouldn’t have Nelle make a prison pal unless they were about to join forces. Will Nelle connect with another inmate who’s just as crazy and ruthless as she is? If so, this could indeed be the beginning of a not-so-beautiful friendship. They could team up on an escape plot, which would make sense considering how crafty Nelle can be.

Nelle is surely fed up with life behind bars. Her plan to score a cushier stay at Ferncliff failed, but she may hope this scheme will bring a better outcome. Nelle might even open up to her friend about the baby she gave away. If Nelle were a free woman, she would almost certainly want Jonah Corinthos back.

Nelle is the kind of woman who shouldn’t be a mother, but that won’t stop her from thinking she’d be a good one. The only reason Nelle gave her kid up to Brad Cooper (Parry Shen) was so Michael Corinthos (Chad Duell) and his family couldn’t have him. Nelle’s had plenty of time to sit in a prison cell and think about how much she’d like to raise Jonah herself.

Will Nelle resolve to make a quick getaway and take back her son? General Hospital fans can’t deny that plan would be right up Nelle’s alley. This could certainly bring a major curveball for Brad and Lucas Jones (Ryan Carnes). At first, they might believe Shiloh Archer (Coby Ryan McLaughlin) figured out the truth and swiped “Wiley.”

Of course, Brad could have other ideas after he learned of Nelle’s escape. He’d know Nelle was most likely behind the kidnapping, but he couldn’t say anything without exposing the switch. Would Brad come clean or let it ride and hope to find another way out?

General Hospital spoilers state that chaos could erupt if Nelle breaks out of prison and ends up on a mission to retrieve Jonah! Do you think that’s what Nelle will have in mind? We’ll give you updates as other GH details emerge. Stay tuned to the ABC soap and don’t forget to check CDL often for the latest General Hospital spoilers, updates and news.