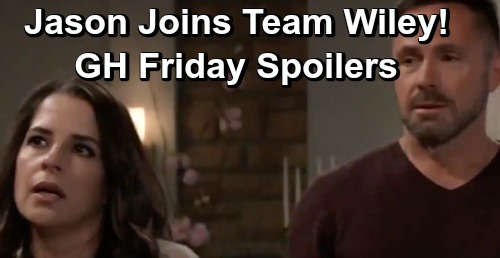 General Hospital (GH) spoilers for Friday, May 31, tease that Jason Morgan (Steve Burton) will walk in on Sam McCall’s (Kelly Monaco) conversation with Julian Jerome (William deVry). Once Sam learned Shiloh Archer (Coby Ryan McLaughlin) was Wiley Cooper-Jones’ birth father, she understood the situation was dire. Sam’s willing to do whatever she has to do to keep Shiloh away from “Wiley.”

Jason will sense that something’s up when he arrives. Sam should fill him in on the drama and leave him incredibly concerned as well. They can’t let Shiloh get his hands on the kid and make him part of his creepy cult, so Jason will want to pitch in.

Meanwhile, Anna Devane (Finola Hughes) will look stunned by Robert Scorpio’s (Tristan Rogers) speech. Friday’s General Hospital preview video shows Robert insisting Anna is the love of his life, but the clip may be misleading. Robert might simply be suggesting they’re always going to be deeply connected. He may give his blessing to Anna’s new engagement in the end.

Regardless, Anna won’t be ditching Dr. Hamilton Finn (Michael Easton) for Robert anytime soon. Instead, she’ll be focused on Alex Devane Marick (Finola Hughes) and the confrontation she has in mind. General Hospital spoilers say Anna will have a good reason to rip into Alex, so her mission will be crucial.

He’ll wonder why Maxie’s so invested in this and warn that it could cause issues. Lulu Falconeri (Emme Rylan) was adamant that Dante had to heal and come home on his own time.

Nevertheless, Maxie will want Lulu to be happy, so she’ll move forward with a plot that could end in disaster. In the courtroom, Scott Baldwin (Kin Shriner) will insist he’s about to do Margaux Dawson (Elizabeth Hendrickson) a favor.

He may bring up the possibility of cutting a deal for Ava Jerome (Maura West). Scott will work every angle he can to help his client, but we all know Margaux doesn’t like to compromise.

Ava will end up entering her not guilty plea as planned, so Scott do his best to get her off the hook. He’ll think he has a good shot of scoring Ava’s freedom, but Ava could shake things up a bit with her courtroom demeanor.

At GH, Laura Webber (Genie Francis) will ask someone what’s going on with him or her. Laura’s pleasant tone doesn’t line up with a Ryan Chamberlain (Jon Lindstrom) chat, so this probably involves Jordan Ashford (Briana Nicole Henry). Laura may push Jordan to open up and share how she’s really handling her kidney dilemma.

Jordan will be frustrated over the fact that her life depends on Ryan of all people. Her fate is in the hands of someone who kills people as easily as he breathes. Ryan doesn’t care whether Jordan lives or dies, but Curtis Ashford (Donnell Turner) will try to make him care. He’ll grab a couple handfuls of Ryan’s hospital gown and likely warn that this transplant is happening.

Ryan will ask what his kidney’s really worth to Curtis. This murderer will play hardball in hopes of getting what he wants, so stay tuned for the gripping scenes ahead. We’ll give you updates as other GH news comes in. Stick with the ABC soap and don’t forget to check CDL often for the latest General Hospital spoilers, updates and news.