General Hospital Spoilers: Behind-the-Scenes Battle for Michelle Stafford – How The Young and the Restless Stole Her from GH 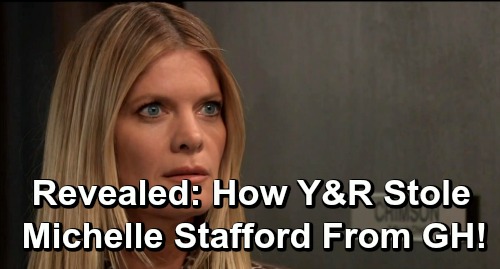 General Hospital (GH) spoilers reveal that we’ve got the scoop on how and why Michelle Stafford (Nina Reeves) left the show. A new interview in Soap Opera Digest explains how Stafford ended up bailing on GH to make a comeback at The Young and the Restless. Y&R’s executive producer, Anthony Morina, was actually the reason this all came about.

In fact, Stafford didn’t expect a career move to be on the horizon. “Michelle wasn’t looking for a job, it was really me,” Morina admitted. “I called Michelle up. We always had a great relationship.” Morina acknowledged that it took some work to get Stafford on board. She was hesitant to leave GH behind, so Morina had to sell her on why he wanted her back at Y&R.

The Young and the Restless has been doing a bit of an overhaul lately. Ever since Mal Young left the position of executive producer and head writer, the show’s been moving in another direction. Out with the new and in with the old seems to be the motto! According to Y&R Head Writer Josh Griffith, they want to restore “iconic sensibility” in Genoa City.

Of course, that ultimately meant Port Charles has to lose Stafford’s version of Nina. Morina desperately wanted Stafford to be part of that iconic push. “She was really happy at GH,” Morina said. “I was explaining what we were trying to do and why. But I will take full responsibility for not giving up on pursuing that.”

In the end, Morina’s enthusiasm rubbed off on Stafford. She understood his vision and left General Hospital to be part of it. That undoubtedly came as a huge shock to the cast and crew at GH. Executive Producer Frank Valentini probably isn’t pleased about losing so much talent to the CBS soap lately. Brytni Sarpy (ex-Valerie Spencer) was also snatched up by Y&R in the contract role of Elena Dawson.

Although Elizabeth Hendrickson will continue playing Margaux Dawson on GH, she’s headed back to Y&R where she’ll certainly make a bigger splash. General Hospital might want to keep Billy Miller (Drew Cain) happy or else Y&R could lure him home to reprise the role of Billy Abbott. There are lots of shakeups going on in the soap world, so anything can happen!