BY Heather Hughes on May 29, 2019 | Comments: 2 comments
Related : Soap Opera, Spoiler, Television, The Young and the Restless 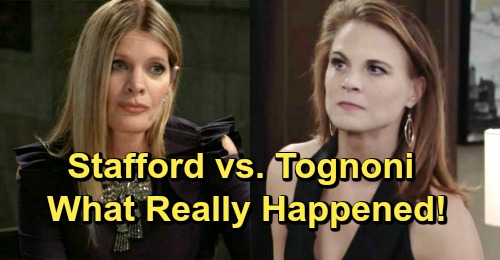 The Young and the Restless (Y&R) spoilers reveal that the truth behind the great Phyllis Summers swap is coming out. Gina Tognoni is currently playing the role onscreen, but she’s already wrapped her stint at the studio. Michelle Stafford is back on set and filming new scenes for her upcoming return, but how did this switch really get set in motion?

“Michelle wasn’t looking for a job, it was really me,” Morina said. “I called Michelle up.” Morina noted that they had a conversation about the future of Y&R and where they wanted to take it. Griffith insisted it was part of a larger plan to take the show back to a place of “iconic sensibility.”

Morina felt like Stafford could be an important part of achieving their goal. “I mean, it’s a piece of the puzzle,” Morina said. “She really wasn’t looking. She was really happy at GH. I was explaining what we were trying to do and why.” Morina didn’t give up pursuing this angle, so he eventually won Stafford over. They managed to stir up some excitement for Stafford during their brief window of opportunity.

Of course, this meant dropping a sudden bomb on Tognoni! She was suddenly out of a job through no fault of her own. Tognoni has been an excellent Phyllis and scored a Daytime Emmy to prove it. What it boiled down to was Morina wanted Stafford instead, so he cut Tognoni loose and let his golden girl reclaim her spot.

Morina assured fans that they love Tognoni and that she was a true professional, but some viewers are naturally still upset. It’s strange that Morina was so insistent on luring Stafford away from a job she loved at General Hospital and kicking Tognoni out of hers. People seem to like Tognoni as Phyllis overall, so there hasn’t been some big fan push to get Stafford back.

Nevertheless, what’s done is done and Stafford certainly has her fair share of supporters. She was successful in the role for many years, so she knows what she’s doing. The Young and the Restless spoilers say they have big plans for Phyllis and some hot new stories, so stay tuned.

How do you feel about these new Phyllis swap details? Do you think it was a bad call to fire Tognoni and bring Stafford back? We’ll give you updates as other Y&R news comes in. Stick with the CBS soap and don’t forget to check CDL often for the latest Young and the Restless spoilers, updates, and news.