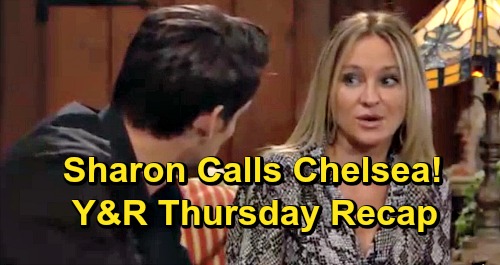 The Young and the Restless (Y&R) spoilers recap or Thursday, May 30, tease that Sharon Newman (Sharon Case) will catch up with Rey Rosales (Jordi Vilasuso). After she brings Rey up to speed on Neil Winters’ (Kristoff St. John) will reading and Drucilla Winters’ (Victoria Rowell) jewelry, Rey will have some news of his own. He’ll admit Nick Newman (Joshua Morrow) offered him the head of security gig at Dark Hose.

Sharon will be surprised by Rey’s updates, but she’ll be all right with Rey taking the job. At Dark Horse, Victoria Newman (Amelia Heinle) will think they need a strategy for dealing with Adam Newman (Mark Grossman). Nick won’t be keen on negotiating, but Victoria will contend that they have to make their attack in an unexpected way. However, Nick will suggest he’s not on board before he exits.

Afterward, Nick will tell Rey what he expects from him. A big part of Rey’s position will be spying on Adam. Nick will mention that things don’t add up for him when it comes to Adam’s shooter. He’ll tell Rey he’ll be providing protection for the family, but he won’t want Rey spilling anything to Sharon. Since Adam’s great at manipulating, Nick will think his brother would pry info out of Sharon and cause drama.

While Rey takes the job, Esther Valentine (Kate Linder) will be stunned when she comes face-to-face with Adam. He’ll suggest that they can talk later, so she’ll seem dazed as she sits at the coffeehouse alone. Once Sharon spots Esther, she’ll walk over to over support.

Other Young and the Restless spoilers say Adam will head over to Newman Enterprises. He’ll sit in Victor Newman’s (Eric Braeden) chair, but Victoria will appear and offer a warning. She won’t want Adam getting too comfortable. Next, Victoria will suggest that she’s fulfilled one of Adam’s demands. She’ll hand over Chelsea Newman’s (Melissa Claire Egan) last known phone number as a nice start.

Victoria won’t be willing to come up with the $500 million Adam asked for, but $50 million is doable. However, Victoria won’t budge on the Christian Newman (Jude and Ozzy McGuigen) issue. She’ll contend that Christian belongs with Nick, but Adam could find his happiness with Chelsea and Connor Newman (Gunner and Ryder Gadbois).

Afterward, Adam will try to contact Chelsea in private. The call will go to voicemail, but Adam won’t leave a message. Instead, Adam will pay Sharon a visit and ask her to call Chelsea for him. He’ll hope Sharon can fill Chelsea in on the shocker that he’s alive. Sharon will grant the request, but she’ll also get voicemail. She’ll urge Chelsea to call her back, so Adam will express his gratitude.

Across town, an urgent meeting will get underway. Y&R spoilers say Jack Abbott (Peter Bergman) will fill in Billy Abbott (Jason Thompson) and Kyle Abbott (Michael Mealor). They’ll discuss the site out of Beijing with the logo similar to Jabot and wonder how they got inside Jabot Collective info.

Summer Newman’s (Hunter King) name will be brought up by Billy, but Jack and Kyle won’t think she’s behind this. Jack will consider Chelsea as an option. After the meeting breaks up, Kyle will contact the tech team to trace the website and figure out who hacked the servers.

At Society, Phyllis Summers (Gina Tognoni) will meet with someone and pressure him to make this happen. She’ll talk about the June 1 launch and her grand plan. Suddenly, Jack will waltz in and want to hear more about this business venture of Phyllis’.

After her business associate takes off, Phyllis will show Jack her tech consulting firm website. She’ll leave him taken aback, but he’ll wish her luck. Jack will meet up with Lauren Baldwin (Tracey E. Bregman) next. When Lauren hears about the copycat site, she’ll declare that it’s unbelievable. Jack will feel like Lauren knows more than she’s letting on, but she’ll play dumb for now.

In reality, Lauren will know exactly who’s behind this. She’ll confront Phyllis soon after, so the schemer will have to listen to her complaints. Lauren will contend that this hurts her right along with Jack. Once Lauren threats to blab, Phyllis will confess that she set up the site. She’ll defend her actions, but Lauren will rage about Phyllis committing a crime and infringing on Jabot.

Lauren will insist that she’s giving Phyllis 12 hours to shut this down. Back with Victoria, she’ll gloat to an impressed Billy about how she dealt with Adam. They’ll enjoy some steamy moments in their car, so “Villy” fans will want to stay tuned.