The Young and the Restless Spoilers: 2 Weeks Ahead – Guilty Mia Backed Into a Corner, Paul Busts Lola’s Attacker 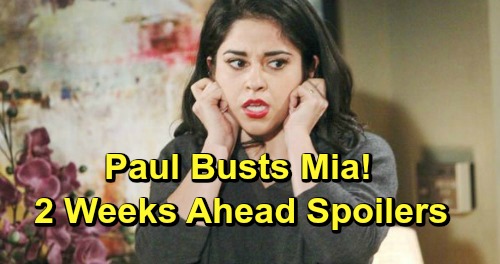 The Young and the Restless (Y&R) spoilers tease that Paul Williams (Doug Davidson) won’t give up on solving Lola Rosales’ (Sasha Calle) case. Lola will be too busy savoring her reunion with Kyle Abbott (Michael Mealor) to care about the identity of her attacker. Love and her new chef gig will be all she’s got on her mind.

However, Paul certainly won’t just let this go. As far as he’s concerned, there’s someone guilty out there who needs to be brought to justice. Paul put Rey Rosales (Jordi Vilasuso) on this case with a goal in mind. Since Paul suspects Rey knows more than he’s letting on, he was hoping Rey would screw up and tip him off to the truth.

Since Rey and Sharon Newman (Sharon Case) will be jetting off to Las Vegas on new Y&R episodes this week, April 29 – May 3, Paul may have to shift strategies. Perhaps he’ll rely on some good old-fashioned detective work of his own. There’s surely something Paul’s missing that could help him. Arturo Rosales’ (Jason Canela) attempt to give Mia Rosales (Noemi Gonzalez) an alibi may fall apart soon enough.

It looks like some puzzle pieces will come together for Paul during the week of May 6-10. Will he be on the verge of proving Mia’s guilt? The Young and the Restless spoilers point to a possible new clue or two. Once Paul’s got a bit more to work with, he’ll decide to rattle Mia’s cage. Paul may think Mia will sing like a canary once she’s cornered.

Y&R fans will watch Mia sweat it out as Paul grills her. Of course, she may not be willing to admit attacking Lola. Mia might call Paul’s bluff here. She may assume he doesn’t have hard evidence that she went after Abby Newman (Melody Thomas Scott) and got Lola by mistake.

Nevertheless, Mia will be more nervous than ever after this. The stress can’t be good for her unborn child, but the worst is still to come. The Young and the Restless spoilers suggest that the attack bomb will indeed blow up at some point. Perhaps Paul will set a trap for Mia to walk into before long.

Are you eager to see Mia pay the price for her awful behavior? How will Mia ultimately get caught? We’ll give you updates as other Y&R news comes in. Stay tuned to the CBS soap and don’t forget to check CDL often for the latest Young and the Restless spoilers, updates, and news.