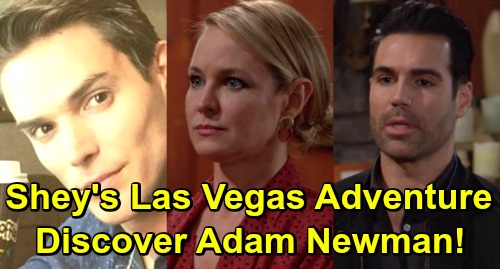 The Young and the Restless (Y&R) spoilers tease that Rey Rosales (Jordi Vilasuso) will meet back up with Nikki Newman (Melody Thomas Scott) to discuss her recent job offer. He’ll wonder if Nikki’s sure she wants him to investigate Victor Newman’s (Eric Braeden) activities. Rey will point out that Nikki could just get a private investigator to look into this, but she’ll want someone she can trust.

Despite any issues between Rey and the Newmans in the past, he proved himself when he helped the cover-up crew after their convictions. Nikki will insist that she wants Rey to handle this, so he’ll agree to head to Las Vegas immediately. Since Victor will already be there, the time to strike is now.

Part of Rey thrives on digging around and looking for clues. The cop in him will always like the satisfaction that comes with solving a case. Rey will also sense that Nikki is truly concerned about whatever Victor’s up to. She won’t want her husband cause up in some mess, especially after they only recently put the J.T. Hellstrom (Thad Luckinbill) mayhem behind them.

After Rey works out the details with Nikki, he’ll track down Sharon Newman (Sharon Case) and reveal that he’s leaving for Vegas ASAP. Sharon will suggest that as luck would have it, she’s got a trip to Vegas planned, too. Rey will immediately assume luck had nothing to do with it, and he’ll be right. However, Rey will actually welcome the chance to have Sharon tag along and offer her opinion.

This Vegas – or Shey-gas! – adventure will bring some fun twists and turns. The Young and the Restless spoilers say Rey and Sharon will prove to be quite the dynamic duo. It turns out they’ll stumble across a secret right off the bat. They’ll barely have time to deboard their plane before they discover something jaw-dropping about Victor.

Y&R fans can expect Sharon and Rey to hit the jackpot, so they’ll probably learn Adam Newman (Mark Grossman) is alive. The Young and the Restless spoilers say they’ll wonder what their next move should be. It looks like Victor will fill his family in during the week of May 6-10, so he may convince “Shey” to let him break the news himself.

Are you excited about Rey and Sharon teaming up? What will first tip them off to Adam’s survival? We’ll give you updates as other Y&R details emerge. Stay tuned to the CBS soap and don’t forget to check CDL often for the latest Young and the Restless spoilers, updates, and news.