The Young and the Restless Spoilers: Week of December 17 – Deadly Danger, Growing Hostility and Secrets Exposed 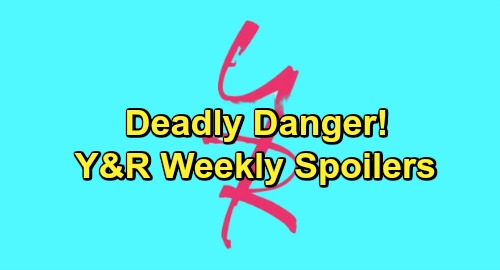 The Young and the Restless (Y&R) spoilers for the week of December 17-21 tease that the holiday season will bring loads of conflict and chaos. There’ll be plenty of tension along with the tinsel this year. Sharon (Sharon Case) will remain on Mariah’s (Camryn Grimes) bad side thanks to her treatment of Tessa (Cait Fairbanks). She’ll call and text dozens of times, but Mariah will refuse to pick up the phone.

Tessa will finally talk Mariah into answering, but it won’t do much good. Mariah will refuse to meet with Sharon to hash things out. She’ll know that neither one of them’s going to budge when it comes to Tessa, so she just won’t see the point. Meanwhile, we could also see more hostility for Abby (Melissa Ordway) and Arturo (Jason Canela). Mia (Noemi Gonzalez) will certainly remain an issue between them.

On the bright side, Abby and Arturo’s relationship could improve thanks to some honesty. Y&R spoilers say Arturo will let some walls down this week, so Abby may be drawn closer. Over with Kerry (Alice Hunter), she’ll make some intriguing discoveries about Jack (Peter Bergman). Kerry will realize her new love interest has been holding out on her. Jack’s past will definitely catch Kerry by surprise.

Back with Sharon, she’ll enjoy a tender moment with Rey (Jordi Vilasuso). If Mia finds out about it, she’ll have another reason to breathe down Sharon’s neck. Mia wants to end their connection for good! Elsewhere, Billy (Jason Thompson) will be feeling festive. He’ll do some Christmas decorating and plan to dote on his kids, but he’ll also have to step up for Victoria (Amelia Heinle).

That’s because the Newman family will be facing a holiday crisis. Reed (Tristan Lake Leabu) will get behind the wheel instead of drunk Charlie (Noah Alexander Gerry), but the wintry conditions will make it tough to see through the windshield. They’ll plow right into wasted Nikki (Melody Thomas Scott), but they won’t see her unconscious body after the hit.

The Young and the Restless spoilers say a random passerby will find Nikki, so she’ll be taken to the hospital for treatment. Nate (Brooks Darnell) will do emergency surgery, but he won’t be sure Nikki can pull through. She’ll be lingering between life and death over the next few episodes.

Billy will comfort Victoria, but she’ll lean on Nick (Joshua Morrow) as well. The Newman siblings will be incredibly worried, especially since Victor (Eric Braeden) will still be unreachable. Finally, Ana (Loren Lott) will keep Devon (Bryton James) out of the loop on something. Will her secret be about protecting Devon or herself?