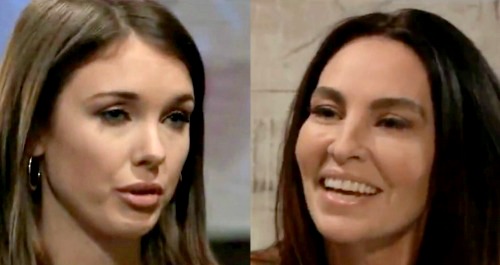 General Hospital (GH) spoilers tease that Willow Tait (Katelyn MacMullen) will have a little more peace of mind than before. She still has to worry about Shiloh Archer (Coby Ryan McLaughlin) going after “Wiley Cooper-Jones,” but Jason Morgan (Steve Burton) returned her pledge. Willow honestly hasn’t been all that concerned about it, but that’s only because she’s had much bigger problems to deal with.

Of course, Willow should destroy that pledge ASAP just as Kristina Corinthos-Davis (Lexi Ainsworth) did. The only other pledge Jason and Sam McCall (Kelly Monaco) kept was Margaux Dawson’s (Elizabeth Hendrickson). Since the rest were torched, that seemingly means Willow’s mother is a free woman, too. Shiloh no longer has power over Harmony Miller (Inga Cadranel), so what will her next move be?

Unfortunately, Harmony may choose not to take advantage of her newfound freedom. She seemed rather jealous of Shiloh’s interest in Kristina and Sam, so she may feel like this is her chance to rise to the top. Harmony may hope she can become Shiloh’s favorite again, especially since he’ll keep manipulating her.

General Hospital spoilers say Harmony will corner Willow and demand some answers on June 5. It sounds like Shiloh will tell Harmony all about how Willow duped him. He’ll undoubtedly want Harmony to help him figure out the identity of his child.

However, Harmony also seemed rattled after Willow unleashed her anger. There was a glimmer of remorse in her eyes, so she still has a shot at turning things around. That could be a problem since Shiloh knows Harmony’s secret. He may not have a signed pledge regarding it now, but he could still use it against her.

General Hospital has made it painfully obvious that Willow is Nina Reeves’ (Michelle Stafford) biological daughter. If it isn’t true after the insane amount of conflict between them, then what’s the point? There’s a reason they’ve made Willow hate Nina’s guts, and it’s surely because Nina is Mommy dearest.

That would make Harmony the adoptive mom, which she wouldn’t want Willow to know. There seems to be part of Harmony that actually cares about Willow. Maybe she even hopes they can reconnect one day, but that won’t happen if the truth comes out. Pledge or no pledge, Shiloh could blow this up for Harmony.

Still, there may come a point when Harmony will have to make that sacrifice. If she betrays Shiloh, Willow and Nina could be in for a rude awakening. It looks like burning those pledges could cause quite the chain reaction. Did Sam and Jason just inadvertently set the big reveal in motion? Will the growing tension between Shiloh and Harmony explode into the shocker?

Most GH fans expect Sasha Gilmore (Sofia Mattsson) to be exposed as a fraud first, but it’d be a fun twist if Willow and Nina’s connection exposed Sasha! General Hospital sometimes goes for those types of curveballs – like when Nelle Benson (Chloe Lanier) went against the soap trope by giving her baby away instead of stealing one.

Regardless, it’s great to see that progress is being made in the daughter storyline. We’ll give you updates as other GH news comes in. Stay tuned to the ABC soap and don’t forget to check CDL often for the latest General Hospital spoilers, updates and news.