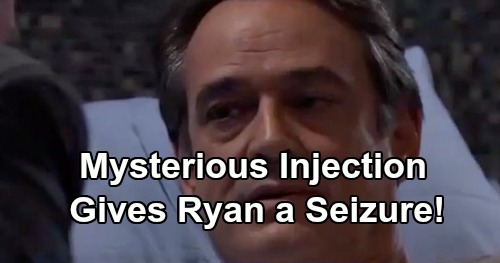 General Hospital (GH) spoilers tease that Jordan Ashford (Briana Nicole Henry) will be fading fast as her family faces her impending death. GH fans know Jordan is in desperate need of a kidney transplant, but Ryan Chamberlain (Jon Lindstrom) refuses to donate one. He’s the only viable match, so that’s obviously a real problem for Jordan.

Desperate times call for desperate measures, so someone will inject Ryan with an unknown substance that causes a seizure. Who will be responsible for the injection? That General Hospital mystery is sure to bring some shockers as it unravels.

Curtis Ashford is determined to get Jordan a kidney from Ryan – no matter what it takes. It’s clear that Curtis loves his wife and would do just about anything to see her recover. Since Ryan hasn’t been willing to cooperate, will Curtis take drastic action and attempt to kill Ryan for a kidney?

Dr. Kevin Collins (Jon Lindstrom) wants to make amends for hiding his brother in Ferncliff instead of turning him over to the cops. He believes the least Ryan can do is donate a kidney to Jordan after all the murders he’s committed. Could Kevin cause a seizure to frighten Ryan into cooperating?

Dr. Hamilton Finn (Michael Easton) has given people drugs before to make it seem like they had an illness and would undoubtedly do it again if necessary. Could Finn inject Ryan as part of a plan to get Jordan’s much-needed kidney? General Hospital spoilers say Ryan will be rattled and in fear for his life following this seizure, which may be exactly what the injector has in mind.

Stella Henry (Vernee Watson) has made amends with Jordan and wants to make sure that she survives her medical issues. General Hospital spoilers say Stella will go to Ryan and ask him to donate a kidney to save Jordan. She’ll make plea and urge Ryan to remember that if he does nothing, he’ll be forgotten. Ryan will just be another serial killer after he croaks.

By giving up a kidney, it becomes a noteworthy story: the dark soul who took many lives but saved one life in the end. That’s something people will remember and talk about. It’s possible Stella will be behind the injection to set up this speech and get Ryan in the right frame of mind. Since he’ll be afraid of dying, it’ll make his mission to be remembered more urgent.