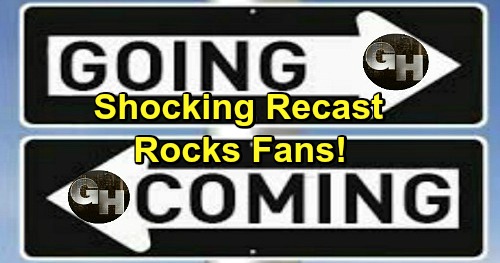 General Hospital (GH) spoilers reveal that there’s some comings and goings news to pass along. For starters, let’s talk about a departure. GH fans know Anna Devane (Finola Hughes) had a chat with Robert Scorpio (Tristan Rogers), which sparked fears about Peter August (Wes Ramsey). She realized Alex Devane Marick (Finola Hughes) might try to use the truth about Peter’s mother to her advantage.

Since Anna’s determined to confront Alex and hash things out, she revealed that she’s headed to Zurich. General Hospital spoilers indicate that marked the start of Finola Hughes’ annual time off from the show. She takes an extended break each summer, so this shouldn’t come as a surprise to many GH viewers. We’ll all be anxiously awaiting Anna’s return along with Dr. Hamilton Finn (Michael Easton)!

In other news, a recast caught plenty of fans off guard. We saw a brand-new face playing the role of Danny Morgan in the episode airing May 31. TK Weaver was forced out of the role, so he shared his disappointment with fans on Twitter. Nevertheless, Weaver assured fans that there are no hard feelings. He loves his General Hospital family and wishes the new actor the best of luck at the show.

Weaver got plenty of sweet messages from viewers and his costars. Kelly Monaco (Sam McCall) and Steve Burton (Jason Morgan) were quick to let Weaver know how much he would be missed. Maurice Benard (Sonny Corinthos) offered some heartfelt words of wisdom, too.

“Whenever somebody leaves the show I always believe you learn from it and go on to the next big thing that is meant to be,” Benard said. He added a boxing glove emoji to encourage Weaver to stay strong. Eden McCoy (Josslyn Jacks) had a kind tweet for Weaver as well. She insisted, “Your #GH family and I love you @tkweaveractor and we are so proud to have worked with you!! Keep being amazing you superstar.”

Other General Hospital spoilers say Harmony Miller (Inga Cadranel) will be back on hand this week. She’ll have a heated confrontation with Willow Tait (Katelyn MacMullen), so she’ll probably get updates from Shiloh Archer (Coby Ryan McLaughlin) and lash out at Willow for lying. Harmony will want answers about the baby’s identity, but you can bet Willow will keep her mouth shut.

General Hospital fans can also expect some Nelle Benson (Chloe Lanier) appearances during the week of June 10-14. It sounds like the baby swap storyling is about to heat up! We’ll keep you posted as other GH details emerge. Stay tuned to the ABC soap and don’t forget to check CDL often for the latest General Hospital spoilers, updates and news.

You’re a rockstar with a bright future! I know you accomplish anything YOU put your mind to. Luv you @tkweaveractor I’ll see you soon! https://t.co/tb6hPVZqWm

TK. You were a DREAM to work with. You are such a talented young man. I know you have a bright future ahead of you. I can’t wait to see your career blossom. I’ll make sure #billymiller sees this post… I know he cares about you as much as I do. You will be greatly missed at #gh