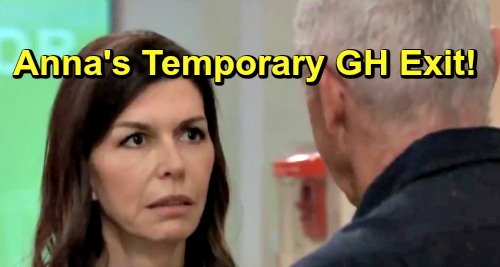 General Hospital (GH) spoilers tease that one ABC soap star is about to exit. Most GH fans know Finola Hughes (Anna Devane) departs for a vacation each summer, so it’s that time of year again. Hughes’ last airdate for now will be Friday, May 31.

Of course, this departure is rather abrupt since Anna and Dr. Hamilton Finn (Michael Easton) just got engaged. They should be celebrating and preparing for their nuptials! However, General Hospital spoilers say Anna may get into some trouble instead.

There’s no confirmation on plot details just yet, but we’ve got a couple of clues to mull over. In Friday’s GH preview video, May 31, Anna looks shocked by Robert Scorpio’s (Tristan Rogers) powerful words. He tells Anna that she’s the love of his life, so she’ll naturally be caught off guard.

Anna made it crystal clear to Robert that she wanted Finn and couldn’t go down this road again with her ex. She shared some big adventures with Robert once upon a time, but she’s put that chapter behind her. Anna feels that Robert is her past and Finn is her future.

Thankfully, Robert seems to understand that as well. There may just some confusion on Anna’s part before Robert explains. Just because someone is the love of your life doesn’t mean you necessarily end up with that person. Sometimes things don’t work out and it shifts to a platonic love, so Robert may wish Anna the best in her new marriage.

Too bad Finn won’t get help planning a wedding anytime soon! Since Anna is headed off canvas for a bit, what’ll take her away? On May 31, General Hospital spoilers say a riled Anna will be determined to confront her sister. It sounds like Alex Devane Marick (Finola Hughes) will do something that fires up some conflict again, so Anna will ready for a fierce showdown.

Could this be a trap? Will poor Anna end up missing for what feels like the millionth time? That’s one possibility to consider. Another one is that Anna will simply discover something that leads her on a mission. She might go along with it willingly while Finn stays behind to deal with Hayden Barnes (Rebecca Budig) and the kid drama we know is coming.