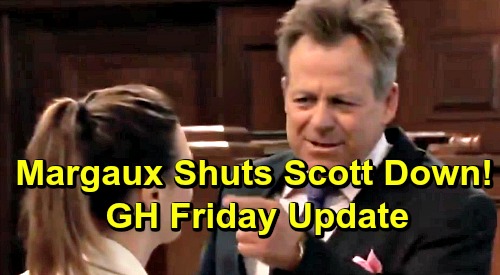 General Hospital (GH) spoilers for Friday, May 31, tease that Ryan Chamberlain (Jon Lindstrom) will face Curtis Ashford’s (Donnell Turner) wrath. Ryan’s putting up a fight on giving a kidney to Jordan Ashford (Briana Nicole Henry), which isn’t going to work for Curtis. He’ll clutch the top of Ryan’s hospital gown as he tries to intimidate him into agreeing to the transplant.

Of course, it’s awfully hard to scare a guy like Ryan. He’ll simply ask how much his kidney is worth to Curtis. Ryan will think maybe they can reach a mutually beneficial agreement, but you can bet he isn’t going to make this easy. Next, Laura Webber (Genie Francis) will head over to GH. It appears she’ll pop in Jordan’s room for a bit to see how she’s doing.

Laura may suspect that Jordan’s putting on a brave face, so it looks like she’ll push her to open up. General Hospital spoilers say Jordan will admit her worries in Friday’s episode. She’ll realize her fate lies in the hands of a serial killer who doesn’t value life at all. Jordan won’t have high hopes for her future, but Laura may urge her to stay strong.

In the courtroom, Scott Baldwin (Kin Shriner) will suggest he’s going to do Margaux Dawson (Elizabeth Hendrickson) a favor. However, it’s doubtful the DA will cooperate. Scott may change his mind on Ava Jerome’s (Maura West) not guilty plea and suggest a sweet deal instead. Whatever the case, Margaux will likely tell Scott to back off and get ready to defend his client.

Ava will rise to her feet when the time comes and declare that she’s not guilty. Will she be able to keep her hatred for Ryan under control? The last thing Ava needs to do is look smug and unrepentant, but that may be what Scott has to work with if he can’t keep her in line.

While Ava faces her attempted murder charges, Peter August (Wes Ramsey) will hear Maxie Jones’ (Kirsten Storms) big idea. She’ll have a way to potentially reunite Dante Falconeri (Dominic Zamprogna) and Lulu Falconeri (Emme Rylan) sooner, but Peter will pump the brakes. Lulu wants Dante to take the time he needs and come home when he’s truly ready, so Peter may think they should respect that.

Maxie will insist that that Lulu needs her husband, which will bring more concerns. Peter won’t get why Maxie’s being so pushy about this, but she may contend that she just wants her friend’s happiness. Nathan West’s (Ryan Paevey) death may be playing a part in this, too. Maxie lost her husband, so she certainly doesn’t want Lulu to lose hers – even if that loss comes another way.

Other General Hospital spoilers state that Robert Scorpio (Tristan Rogers) will create some awkward moments. He’ll stand before Anna Devane (Finola Hughes) and insist she’s the love of his life, but he may not mean it exactly how it sounds. Robert might clarify that Anna’s always going to hold that spot in his heart, even though he’s accepted that they’re not meant to be.

Anna will also have some sister problems to contend with on Thursday. Alex Devane Marick (Finola Hughes) will manage to provoke Anna, so this may involve a letter or a call. Regardless, General Hospital spoilers say Anna will seethe enough to want a fierce faceoff. She’ll exit the canvas as Hughes begins her annual summer vacation, so don’t miss Anna’s last episode for a while.

GH fans can also expect Jason Morgan (Steve Burton) to grow curious. He’ll notice the tense vibe when he finds Sam McCall (Kelly Monaco) talking to Julian Jerome (William deVry), but it’s only because they fear Shiloh Archer (Coby Ryan McLaughlin). After Jason gets updates on the birth father mess, he’ll be on the same page about protecting “Wiley Cooper-Jones.”

Another thrilling episode is coming up. We’ll keep you posted as other GH news emerges. Stay tuned to the ABC soap and don’t forget to check CDL often for the latest General Hospital spoilers, updates and news.