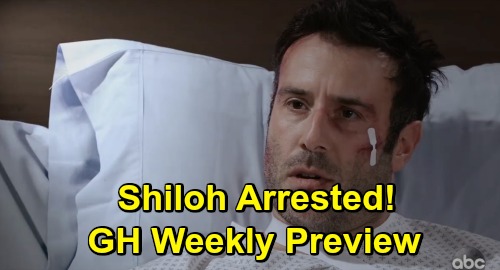 General Hospital spoilers reveal a brand new preview promo video for the week of June 3 to June 7 and GH fans are advised that ‘General Hospital is heating up and summer has just started.’ Below are some of the highlights of the preview video and an explanation of what we can expect over the next few new GH episodes.

General Hospital’s Valentin Cassidine (James Patrick Stuart) sees Jasper ‘Jax’ Jacks (Ingo Rademacher) as a threat to his happiness with Nina Reeves (Michelle Stafford) and will approach Sonny Corinthos (Maurice Benard) for help. Sonny hates Jax but will he risk upsetting Jocelyn Jacks (Eden McCoy) by joining with Valentin to get rid of him?

General Hospital’s Harmony Miller (Inga Cadrenal) demands to know where Willow Tait’s (Katelyn MacMullen) baby is. Shiloh Archer (Coby Ryan McLaughlin) knows that Willow didn’t have a miscarriage and Harmony is trying to find the baby for him. Willow doesn’t know how true the story she gave Shiloh is because her baby is dead. Will the search for Shiloh’s child lead to the reveal of Michael Corinthos’ (Chad Duell) baby? How will the fall out from this discover effect everyone in Port Charles?

General Hospital’s Carly Corinthos (Laura Wright) turns to her son Morgan Corinthos (ex-Bryan Craig) to watch over his unborn sibling and assure the child’s safety. Carly misses Morgan terribly and believes his spirit will take care of the child. Will a visit to Morgan’s grave reassure Carly about the baby, or will she become even more concerned?

General Hospital’s Stella Henry (Vernee Watson) manages to do what half of Port Charles has failed to do, Stella talks Ryan into donating a kidney to Jordan Ashford (Briana Nicole Henry). Stella’s social worker training pays off when she convinces Ryan to make his life matter by giving life to someone else. Does Ryan want to be known as something other than a serial killer? Will Jordan receive the kidney in time to save her life?

General Hospital’s Harrison Chase (Josh Swickard) arrives in Shiloh room and places him under arrest. Did Sam McCall (Kelly Monaco) file charges against Shiloh for drugging her and attempting to rape her? Has another victim come forward to accuse Shiloh of rape?

Has Chase arrested Shiloh for harassing Willow? Whatever the charges, there is certainly be a fight with Margaux Dawson (Elizabeth Hendrickson) when it comes to making Shiloh pay. Shiloh is sure the D.A. is in his back pocket and will make any charges disappear, but will she?

I looks like General Hospital is offering fans a great week of dram ahead. CDL will be covering it all so please come back for all your General Hospital spoilers, updates and news as this soap summer heats up?