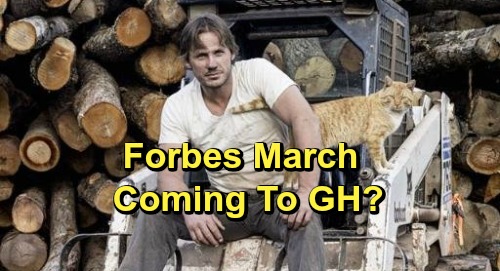 General Hospital spoilers report that there is buzz that ABC executives are in contract talks with One Life To Live alum Forbes March who played Nash Brennan. Are TPTB at GH looking for a recast of an existing role or a brand new character altogether? What role could Forbes be considered for on the GH set?

General Hospital’s Lucky Spencer (Jonathan Jackson) has been an absentee parent for years. The last time we saw Lucky was when he brought Jake Spencer (Hudson West) home. Lucky dropped the child off and left town within a matter of hours leaving him with Elizabeth Baldwin (Rebecca Herbst) and Jake Doe (Billy Miller). Have GH executives realized that it’s time for Lucky to stop being portrayed as a deadbeat dad and decided to recast?

General Hospital’s Jasper Jacks (Ingo Rademacher) is in town, and Jerry Jacks (Sebastian Roche’) is probably not far behind. With Roche’ working on other projects, could Jerry return to town in disguise? Jerry has used deception before to get into town and set up a robbery; his Mr. Craig character caused enough heartache before his true identity was revealed. Unfortunately, when Jerry comes to town, death and destruction usually follows, who could be his victim this time?

Peter Is Searching For Dante

General Hospital’s Peter August (Wes Ramsey) has agreed, at Maxie West’s (Kirsten Storms) urging to find Dante Falconeri (Dominic Zamprogna). With Dominic no longer on contract, could Forbes be a Dante recast? Maxie believes that Dante needs to come home to be with his wife instead of turning out like her father and staying MIA to work with the WSB. Could Forbes change his appearance and be cast as the new Dante?

Could Forbes Be the Robber/Scam Artist?

General Hospital’s Lulu Falconeri (Emme Rylan) is working on a story concerning the dating app and Forbes is an attractive man. Forbes’ looks would certainly work for a man looking for love on a dating site, and no one would suspect him as a robber and scam artist. Forbes plays a perfect bad guy as well, so the dating app robber is not a far reach from anything he’s done before and could be very interesting. The robber could be the best possibility for him yet.

Would fans welcome Forbes March to the already bloated GH cast? Forbes acceptance could very likely be based on what role he plays. Forbes is an amazing actor and would be a great asset to the General Hospital cast regardless of his character. Come back to CDL for all your General Hospital spoilers, news and reports!