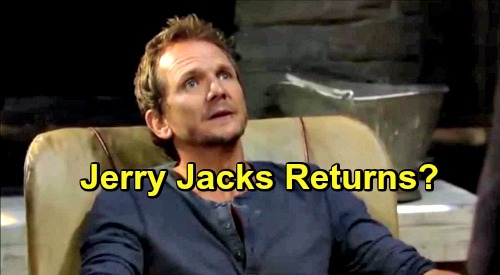 General Hospital (GH) spoilers reveal that Jasper “Jax” Jacks (Ingo Rademacher) and Valentin Cassadine (James Patrick Stuart) don’t seem to be strangers by any sense of the word. Jax certainly didn’t seem bothered by Alexis Davis’ (Nancy Lee Grahn) warning about the sneaky Cassadine. What are Jax and Valentin up to? Does it involve Jerry Jacks (Sebastian Roché) as well?

Jax didn’t want to hear anything about the Cassadines when he met Alexis for a drink. Alexis tried to warn Jax to be careful because of Valentin’s unpredictability. She seems terrified that Jax could get hurt in an alliance with Valentin. Alexis knows her half-brother, and he’s not a good guy.

Alexis told Jax that Valentin killed Nikolas Cassadine (Tyler Christopher), but that’s no big deal to him. Jax hated Nikolas anyway, so he’s just glad the guy’s gone. As for what’s happening at Crimson, Valentin didn’t seem pleased about Nina Reeves (Michelle Stafford) relying on Jax to teach her anything about the business world. There’s already some jealousy emerging.

Will Jax try to separate Nina and Valentin? Will he simply be there to pick up the pieces when Nina’s world blows apart? General Hospital spoilers suggest that Jax and Nina’s connection will deepen one way or another, so Valentin had better watch out.

Jerry shows up almost every time Jax is in Port Charles. He also had alliances with the Cassadines, so there’s the potential for drama here. Could Jerry come back to stir up trouble as usual? What type of disaster could Jerry bring with him?

Jerry supposedly had plutonium poisoning and should rightfully be dead, but of course, he’s been presumed dead before and probably will be again. When Jerry comes to town, a mess inevitably follows. GH fans could be treated to quite the show if that happens.

Until then, maybe General Hospital will show us if there’s more to the story with Valentin and Jax. Is Jax planning to team up with Valentin? Does he hope they can take on Sonny Corinthos (Maurice Benard) in some way? Two heads are better than one if you’re going after an enemy, so anything’s possible.