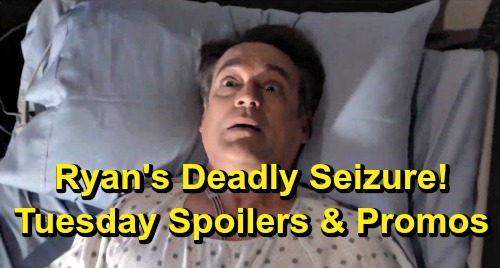 General Hospital (GH) spoilers for Tuesday, June 4, tease that Carly Corinthos (Laura Wright) will have a lot on her mind. It looks like she won’t be able to shake her concerns about the baby. During a chat with Sonny Corinthos (Maurice Benard), Carly will admit she doesn’t know what to do about it. She may be suggesting she can’t let go of her nagging fear that something will go wrong.

Later, Carly will stop by Morgan Corinthos’ (Bryan Craig) grave in an effort to find peace. She’ll undoubtedly open up to her son and share her worries. Morgan obviously can’t talk back, but Carly may feel his presence and try to figure out a way to press on.

Elsewhere, Josslyn Jacks (Eden McCoy) will lean on Cameron Webber (William Lipton) for support. They’ll discuss music and how it can help in times of pain. Cam will point out that music lets you say the things you don’t have the words to say. Maybe he’ll encourage Joss to write another song and keep working through her intense grief.

Other General Hospital spoilers state that Franco Baldwin (Roger Howarth) will speak with Elizabeth Webber (Rebecca Herbst). He’ll point out sometimes the ends justify the means. Franco may be referring to the situation with Ryan Chamberlain (Jon Lindstrom). Ryan’s about to have a seizure thanks to the mystery intruder’s injection, so Franco may consider it a good deed if it gets Jordan a kidney.

Then again, it may take a while before Ryan’s doctors figure out exactly what caused his sudden episode. Regardless, Dr. Hamilton Finn (Michael Easton) will pass along the dire news in the waiting area. Once Ryan is stable, Stella Henry (Vernee Watson) will step up and allude to a secret weapon. She’ll plan to make a pitch to Ryan and refuse to leave until he agrees to give up a kidney.

Dr. Kevin Collins (Jon Lindstrom) was heard on a suspicious phone call on Monday’s GH episode, June 3. He told someone “it’s better this way” and looked awfully sinister just before Ryan’s injection. Kevin may have orchestrated this with the goal of saving Jordan and undoing some of the damage he inadvertently caused. On the other hand, it could be a bit of misdirection on GH’s part.

Whatever the case, Jordan won’t have much hope just yet. She’ll remain in a somber state as she bids her loved ones farewell. Jordan may have more to share with Curtis Ashford (Donnell Turner), but it’ll be T.J. Ashford’s (Tajh Bellow) turn soon. She’ll have so much to tell her friends and family before she fades away.