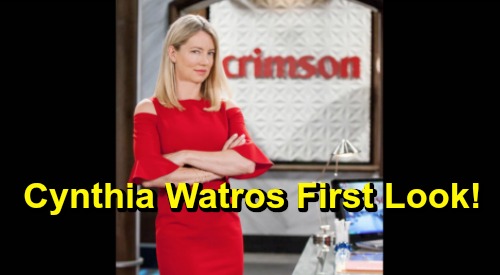 General Hospital (GH) spoilers tease that we finally know when Cynthia Watros will make her long-awaited debut as Nina Reeves. She’ll be taking over the role from Michelle Stafford starting Monday, June 17. ET offered some first-look pictures to get GH fans excited about the recast and the bombshell to come.

Watros will undoubtedly put her own spin on Nina, but she’s a fantastic actress and should play the part well. As for Watros’ first episode, General Hospital spoilers say there are some surprising new details to pass along. Nina will remain busy at Crimson, but she’ll make time to reach out to a friend.

It turns out Watros’ debut will come with a shocker. She’ll head over to GH for a visit with Curtis Ashford (Donnell Turner), who’ll be drowning in medical bills thanks to Jordan Ashford’s (Briana Nicole Henry) ordeal. Nina’s got the funds to cover it, so she’ll offer to take care of everything for Curtis. She’ll want Curtis to focus on Jordan’s recovery without financial fears creeping in.

Of course, Curtis will turn Nina down. He’ll appreciate his pal’s kindness, but he just won’t feel right about accepting Nina’s money. General Hospital spoilers say Nina will confide in Valentin Cassadine (James Patrick Stuart) later. We’ll get to see what Watros and Stuart’s chemistry is like right off the bat, so that’s exciting news.

However, Valentin and Nina’s romance will undoubtedly fall apart down the road. Nina seems poised to get together with Jasper “Jax” Jacks (Ingo Rademacher) after Valentin’s lies are exposed. Sasha Gilmore (Sofia Mattsson) will be revealed as Nina’s fake daughter sooner or later, so Watros will get some gripping, emotional material once she’s had a chance to settle in.

In the meantime, Nina’s confession about Curtis will spark an idea for Valentin. He’ll determine that he could use Curtis’ help with a project, which he’d pay him a great deal for. General Hospital spoilers say this could lead to more trouble, so stay tuned for all the drama to come.

Are you looking forward to Cynthia Watros’ debut as Nina Reeves? We’ll give you updates as other GH details emerge. Stick with the ABC soap and don’t forget to check CDL often for the latest General Hospital spoilers, updates and news.