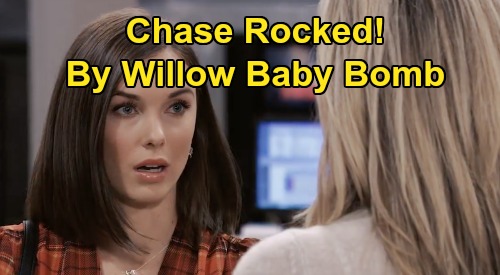 General Hospital (GH) spoilers tease that Harrison Chase (Josh Swickard) has some huge news headed his way – at least if Willow Tait’s (Katelyn MacMullen) hunch turns out to be correct. Willow told Sasha Gilmore (Sofia Mattsson) that they’d been careful, but she also admitted she might’ve skipped a few days of birth control. That’s not really so careful, Willow!

Now Willow’s late and queasy, which isn’t a good combo if you’re hoping for a negative pregnancy test result. There’s no guarantee Willow indeed has a bun in the oven, but Sasha advised Willow to be honest with Chase. She feels at this stage of their relationship, it’s important for Willow to trust Chase with this kind of bombshell.

However, it looks like Willow will continue to keep Chase in the dark. She’ll want to get some proof one way or the other before she bothers Chase with this. A baby is a huge deal, so Willow will just want to know what she’s dealing with first. During the week of December 2-6, General Hospital spoilers say Willow will seek the truth. It sounds like she’ll take a pregnancy test and await the results.

A couple days later, Willow will unburden herself to Sasha. There are few ways GH could take this. It’s possible Willow will realize she’s not pregnant after all, which could lead her to reexamine her thoughts on having them. Willow might realize how terrified she’d be if this became the real deal. She could also find herself feeling disappointed in a way and eager for the day she can raise her own child.

Of course, the most dramatic option would be that Willow’s fears are confirmed. It makes sense to give Willow a baby in preparation for the baby swap reveal. It would soften the blow of finding out the real Wiley Cooper-Jones is dead.

A baby would also bring some upheaval for Willow’s relationship with Chase. He seemed like he was about to admit he wasn’t ready for fatherhood during his chat with Michael Corinthos (Chad Duell). Willow and Sasha returned to the table before Chase could confirm his stance, but it’s safe to say he’d be thrown by this baby shocker.

General Hospital spoilers say Chase will open up to Hamilton Finn (Michael Easton) during the week of December 9-13. Will Chase know he’s going to be a father by then? Chase might simply be confiding about Willow’s strange behavior. He may feel like his girlfriend’s keeping secrets and slipping away. However, it’s also possible Chase will discover the truth and need Finn’s advice as a sudden new dad.

Chase is fantastic with kids, but he may not feel like he’s prepared for one of his own. This would be a great opportunity for Finn to talk about the instant love that comes with having a child. He could insist that when the time comes, Chase will step up and know what to do – just like Finn’s done with Violet Barnes (Jophielle Love).