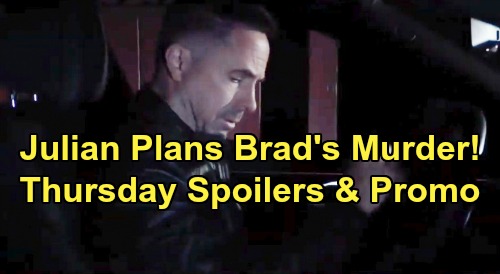 General Hospital (GH) spoilers for Thursday, November 28, tease that Maxie Jones (Kirsten Storms) and Peter August (Wes Ramsey) will enjoy a visit with Anna Devane (Finola Hughes). At Anna’s place, Maxie will wonder if Peter told Anna the good news. Anna will look surprised, so it doesn’t seem like she’ll be in the loop on Peter’s move-in with Maxie yet.

Once Anna gets updates, she’ll undoubtedly congratulate the duo on taking the next step. Nevertheless, Anna tends to be quite observant and should pick up on Peter’s nervousness. She may blame it on their awkward reconnection at first, but that excuse can only fly for so long. Anna will definitely grow more suspicious about what Peter’s hiding in the coming weeks.

In the meantime, Kendra Lennon (Michelle Argyris) and Alexis Davis (Nancy Lee Grahn) will be suspicious of each other! The pill Neil Byrne (Joe Flanigan) sent to the lab was harmless, but that won’t stop Alexis from thinking Kendra’s shady. She’ll behave differently around Kendra now that her spidey senses are tingling, so Kendra will wonder if there’s something Alexis isn’t telling her.

General Hospital spoilers say Alexis will keep trying to crack the case on Thursday. She’ll eventually stumble across a shocking truth while Neil puts his own puzzle pieces together. Perhaps Neil will realize the powdered drink supplement was what contained the poison. As for Alexis, she may realize a deeper truth and uncover Kendra’s connection to Kiefer Bauer (Christian Alexander).

Whatever the case, Kendra’s next attack will catch Alexis off guard. Over with Julian Jerome (William deVry), he’ll plan a drastic move of his own. In Thursday’s preview video, Julian can be seen in a dark car. He mutters that Brad gives him no choice, so it appears he’ll tamper with Brad’s vehicle in hopes of killing him.

While Julian’s busy with his murder plot, Brad will make excuses during a chat with Michael Corinthos (Chad Duell). Michael will think he knows why, so he may hint that he’s picked up on all the “Brucas” tension. He might give Brad a pep talk and offer to babysit “Wiley Cooper-Jones” (Erik and Theo Olson) while Brad sorts things out with Lucas Jones (Ryan Carnes).

At GH, Lucas will talk to Elizabeth Baldwin (Rebecca Herbst) about a serious mistake. He was set to work on Thanksgiving, but he may try to get out of it due to Brook Lynn Ashton’s (Amanda Setton) advice. Brook Lynn feels like Lucas needs to stop saving everyone else and focus on trying to save his marriage.

Of course, getting in Brad’s tampered car could be the true mistake here. Lucas will end up behind the wheel later, and they’ll argue as they speed down the road together. What could possibly go wrong? Clearly, a lot! A horrific accident is coming up, so don’t miss the next few episodes.

Over with Andre Maddox (Anthony Montgomery), he’ll tell “Drew Cain” aka Franco Baldwin (Roger Howarth) that it’s not too late to change his mind. Andre won’t want to go through with this procedure if “Drew” isn’t 100-percent certain. However, it looks like Thursday will just involve some preliminary steps. “Drew” still has to celebrate Thanksgiving at the Quartermaine mansion, so the procedure won’t be completed just yet.

Finally, General Hospital spoilers say Mike Corbin (Max Gail) will leave his family concerned. He’ll be home for Thanksgiving, but there’ll be some worries when he picks up Donna Corinthos. Mike will greet the baby and ask what her name is as Carly Corinthos (Laura Wright) comes in with the others. They may rush to take Donna away out of fear that Mike will drop her or harm her inadvertently.