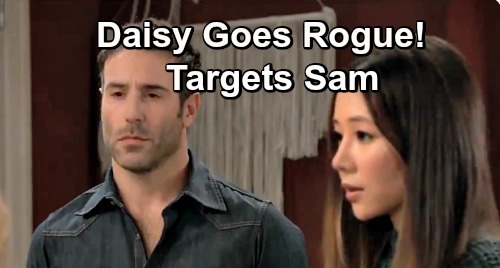 General Hospital (GH) spoilers tease that there could be a major twist coming in up in the cult storyline. Shiloh Archer (Coby Ryan McLaughlin) certainly seems a bit too good to be true. He’s impressed Kristina Corinthos-Davis (Lexi Ainsworth) with his words of wisdom and incessant platitudes, but Sam McCall (Kelly Monaco) and Jason Morgan (Steve Burton) smell a rat.

It’s easy to see that Shiloh isn’t telling the whole story. He seemed surprised when he first ran into Jason and thought he was Drew Cain (Billy Miller), but that was apparently an act. Shiloh’s expression in private appeared to be one of resentment, not the deep gratitude he claims to have.

Now Sam knows Shiloh used to be David Henry Archer, the son of a man she conned out of millions. Since Kristina and Oscar Nero (Garren Stitt) are both wrapped up in this cult, that’s a few too many coincidences for Sam’s taste. However, there could be another explanation for how some of this puzzle fits together. Shiloh may be shady, but he’s not the only one!

We have to consider Daisy’s (Kelsey Wang) involvement in all this. Daisy’s the one who lured Kristina and Oscar into Dawn of Day. She’s been pushing all the DOD tactics on them as much as possible. GH fans also saw Daisy nervously picking up that Galena newspaper, which Yvonne Godfrey (Janet Hubert) subscribes to. That’s where the obituary that was sent to Sam came from.

It’s reasonable to assume Shiloh has tasked Daisy with carrying out his dirty work, but what if he didn’t? What if Daisy’s doing some of this on her own? After all, Shiloh does seminars that are all about unburdening your past. He’s undoubtedly opened up to his followers at some of those. Perhaps Shiloh’s given details about his past and how Sam fits into it.

Due to Shiloh’s good looks and charismatic nature, it seems the women in this cult get a little obsessed. Kristina assured Sam she wasn’t sleeping with Shiloh, but she’s incredibly drawn to the guy. She feels an intense connection, even if it isn’t romantic at this point. Daisy surely feels the same way – perhaps even more so since she’s been in this cult much longer.

It’s easy to imagine Daisy being obsessed with Shiloh and targeting Sam because of that. General Hospital spoilers suggest Shiloh’s past with Drew is driving his interest in Port Charles. That doesn’t exactly line up with Sam’s assumption that she’s at the center of his twisted web.

Daisy also took the lead during Kristina’s latest attempt to unburden herself, which basically involved blaming her as a victim. Kristina assured an outraged Sam that Daisy was helping her, but she seemed to be doing more harm than good.

The email sender claimed he or she wanted to help Sam, too. It may be significant that GH had Daisy stepping up instead of Shiloh for those Kristina scenes. That could’ve been a clue, so it’s wise to keep a close eye on Daisy and the extent of her role in this mess.

Is Daisy obsessed with Shiloh and possibly doing more than he’s asked of her? Is Daisy just following orders or could she have gone rogue to rattle Sam? We’ll give you updates as other General Hospital details emerge. Stay tuned to ABC’s GH and don’t forget to check CDL often for the latest General Hospital spoilers, updates and news.