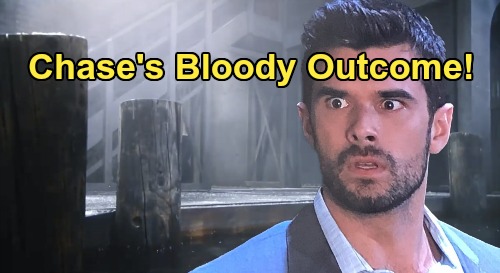 General Hospital (GH) spoilers tease that Harrison Chase (Josh Swickard) will head into risky territory. Before we get to that, let’s consider some clues that might lead to his perilous encounter. On September 24, Chase will go out of his way to console Willow Tait (Katelyn MacMullen). He’s a busy guy due to his work as a detective, and he’ll be even busier soon thanks to some new crimes.

However, Chase always wants to make sure Willow feels safe, loved and cared for. General Hospital spoilers say Chase will try to check all the boxes and give Willow what she deserves. We have to wonder why Willow will need comforting. Will Willow discover “Wiley Cooper-Jones” isn’t her son after all? That shocker will indeed come out, so it’s just a matter of when.

We should mention that Brad Cooper (Parry Shen) will apologize the day after Chase comforts Willow. Brad will be sorry for all his mistakes, so it’s possible he’ll admit Willow’s baby died the night he came home from the hospital. Naturally, Brad might leave out the part about this being Nelle Benson’s (Chloe Lanier) child with Michael Corinthos (Chad Duell).

Regardless, it seems Chase will get caught up in a crisis. On September 25, General Hospital spoilers say Chase will arrive at the docks – and we know nothing good happens there! This is the perfect setup for a dangerous showdown. Will Shiloh score his freedom and put a “Wiley” kidnapping plot in motion? It’s easy to imagine Shiloh shooting Chase to hurt Willow and keep his plan in play.

Fans have heard plenty of ominous comments about Chase’s line of work. Lulu Spencer’s (Emme Rylan) warning really got under Willow’s skin, but she’s trying to accept that Chase’s job is risky and move on. Nevertheless, GH has definitely laid the groundwork for Chase to find himself in a violent situation with bloody results.

Of course, we can’t forget about Nelle, who surely wants revenge on Chase. He’s part of the reason she landed behind bars – and they used to have their clandestine meetings down by the docks. Nelle pushed Chase to kill Michael, and the trap eventually blew up her life. She could escape and lure Chase into a trap her own.

Whatever the case, it sounds like Chase will walk right into a potentially lethal faceoff. General Hospital spoilers suggest all this danger by the docks will bring serious suspense. The night may end with Willow in total panic mode! We’ll give you updates as other GH news comes in. Stay tuned to the ABC soap and don’t forget to check CDL often for the latest General Hospital spoilers, updates and news.