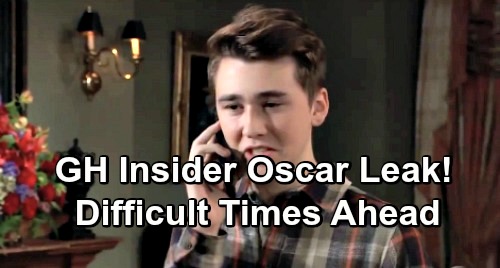 General Hospital (GH) spoilers tease that Oscar Nero’s (Garren Stitt) future will remain uncertain. For now, that’s a step in a positive direction since Oscar’s future was definitely grim before. He had given up on fighting to survive until Josslyn Jacks (Eden McCoy) learned the truth. She convinced Oscar to enter this clinical trial, which has given Oscar’s loved ones hope that he’ll stick around.

Unfortunately, this clinical trial also brings grave danger. Oscar could have an adverse reaction and actually die sooner than if he’d skipped the treatment. They just don’t know how his body will respond. Even if Oscar’s initial results show progress, that’s no guarantee that things will keep looking up.

Drew Cain (Billy Miller) and Kim Nero (Tamara Braun) are rooting for a good outcome, but they can’t be sure of anything. On January 7, General Hospital spoilers say Dr. Terry Randolph (Cassandra James) will have a meeting with Kim at GH. They’ll most likely discuss Oscar’s condition and how the treatment’s working out so far.

It may be too early to make any long-term prognosis for Oscar. Then again, it’s possible Oscar will show some signs of improvement. Drew and Kim will end up discussing their potential relationship later, which seems like great news for Oscar. It’d be weird for his parents to be thinking about their romantic feelings if he was knocking on death’s door.

It sounds like Terry will either suggest there’s been no change or reveal that the tumor’s reduced in size. However, those will just be the preliminary findings. Down-the-road General Hospital spoilers hint at a much darker path for this story. Oscar’s health could decline fast and hard at some point.

In a recent issue of Soap Opera Digest, Co-Head Writer Shelly Altman talked about how Oscar’s family would handle his crisis. Monica Quartermaine (Leslie Charleson) will remain involved in all this as well. She’ll want to be supportive and help in any way she can. “Kim, Drew and Monica’s love for Oscar will carry them through what could be some very difficult days ahead,” Altman said.

“Very difficult days” could mean the end will draw near for Oscar or at least that the situation will grow dire. Will Oscar ultimately make a miraculous recovery or is he a goner? We’ll give you updates as other GH details emerge. Stay tuned to the ABC soap and don’t forget to check CDL often for the latest General Hospital spoilers, updates and news.