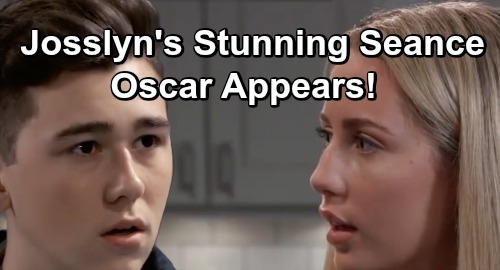 General Hospital (GH) spoilers tease that Josslyn Jacks (Eden McCoy) will mull over her next move. Ever since Oscar Nero Quartermaine (Garren Stitt) died, Joss has been struggling to let go. She now feels like that’s something she can’t do until she says goodbye.

GH fans will recall that Josslyn fell asleep while reading to Oscar. When she woke up, Oscar had already passed away. Josslyn regrets not having a proper farewell with her boyfriend, so her current séance mission could be the answer. However, Lucy Coe (Lynn Herring) wasn’t too keen on the idea since Oscar would want Josslyn to keep moving forward.

Josslyn undoubtedly knows that deep down, but she’s stubborn like her mom, Carly Corinthos (Laura Wright)! General Hospital spoilers suggest this séance will happen with or without Lucy’s cooperation. Trina Robinson (Sydney Mikayla) is always down for risky adventures and drama, so it looks like she’ll encourage Joss to pursue this. If this could aid in Josslyn’s healing, Trina will be all for it.

Cameron Webber (William Lipton), on the other hand, may have reservations like Lucy. Part of him will likely want to give Joss closure, but another part him may feel like he’s betraying his friend. Oscar wouldn’t like Joss dwelling on this loss. He’d rather see Josslyn making fun plans for the summer and going out to enjoy herself. Oscar wanted Josslyn to live her life, not fixate on his death.

Nevertheless, it seems Cam will promise to pitch in as well. Perhaps the teen crew will get some help from Dev (Ashton Arbab), who’ll arrive from Turkey in the week ahead. At Sonny Corinthos’ (Maurice Benard) request, Dev will watch over Josslyn and report back if there’s anything troubling.

This séance would fall under that category, but he might give Joss a pass once he hears the situation. Dev might even know a thing or two about séances and be able to assist Josslyn. Whatever the case, it should be interesting to see how this all goes down.

GH probably wouldn’t have brought up the séance suggestion if they weren’t going to do it, so it sounds like Joss will go through with it. Will Josslyn actually make contact with Oscar? General Hospital spoilers say there’ll be a few options here.

One might be that a well-meaning Cameron cheats a bit. He might find some way to give Josslyn a message and let her believe it came from her dead beau. If Josslyn later found out, that might give Dev the upper hand in the potential love triangle. GH will need to set up some conflict between Cameron and Josslyn eventually.

There’s also a chance Joss will summon something more sinister instead. All of this seems pretty creepy, so maybe some signals will be crossed and Josslyn will get in touch with someone else. This could turn out to be awfully eerie instead of sweet.

Of course, it’s also possible the plan will work like a charm. Oscar might give Josslyn a message from the other side and urge her to truly move on this time. Joss could get the goodbye she’s looking for and perhaps a few words to tell Kim Nero (Tamara Braun), too. Oscar’s mom will definitely need some kind of light at the end of this tunnel.

Do you think Oscar will talk back to Josslyn through a séance? Will Josslyn get the closure she so desperately needs? We’ll give you updates as other GH news comes in. Stay tuned to the ABC soap and don’t forget to check CDL often for the latest General Hospital spoilers, updates and news.