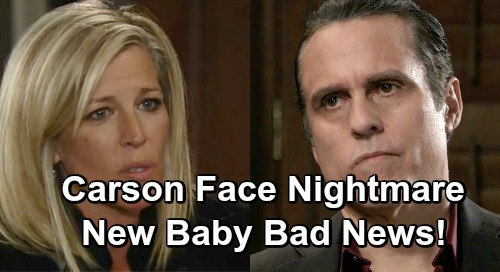 General Hospital (GH) spoilers tease that major baby drama could be brewing for Carly Corinthos (Laura Wright). GH fans couldn’t help but notice that ominous look exchanged between Carly and Bobbie Spencer (Jacklyn Zeman). Before Carly went in to have her CVS test done, there seemed to be a warning sign of trouble to come. Will the life of Carly’s unborn child be in jeopardy?

Carly seemed much more concerned about the possibility of bipolar disorder than anything else that could go wrong with the baby. Is genetic testing worth the possible repercussions of fetal demise? Carly isn’t a carrier of any genetic disorder that we know of, so why take the risk? Should Carly have embraced a wait-and-see attitude instead?

Although the CVS test can identify several genetic disorders, it’s also an invasive procedure and has a small chance of causing a miscarriage. Carly almost seemed to be wondering if the need to know was worth it as she headed down the hallway with Epiphany Johnson (Sonya Eddy). Bobbie also looked concerned as Carly walked away. As a nurse who knows what could happen, does she fear the worst?

Bobbie seems to think Sonny made excuses to avoid being with Carly for this CVS test. She insinuated that Sonny is afraid to get attached to the baby. Sonny loves children and will love this one just as much as his other kids if the child is born. This isn’t about being afraid to have this child; Sonny is just worried about Carly’s health.

Sonny wanted Carly to have an abortion when she was pregnant with Josslyn Jacks (Eden McCoy) for the same reason. He loves her like his own child now, but it shows how Carly is the priority when it comes to her pregnancies. What happens if disaster strikes? Could Carly forgive Sonny if she lost their baby and he wasn’t there to comfort her?

General Hospital viewers know Sonny and Carly lost a baby to placenta previa. The same thing happened with Sonny and Sam McCall’s (Kelly Monaco) daughter. Lily was blown up while pregnant and Claudia lost their son in an accident. Carly also lost a child with Jasper “Jax” Jacks (Ingo Rademacher). Anyone could understand Sonny’s hesitation to get attached to this new little one, but he truly wants this baby.