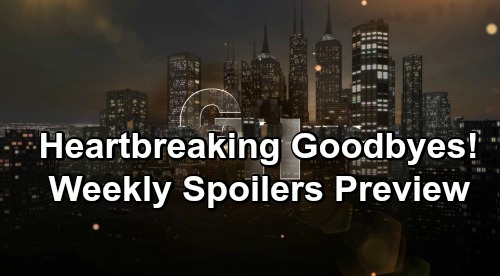 General Hospital (GH) spoilers for the week of April 29-May 3 tease that the pressure will rise for several Port Charles residents. For starters, Alexis Davis (Nancy Lee Grahn) will remain fearful over Kristina Corinthos-Davis (Lexi Ainsworth). She certainly doesn’t want to lose her daughter forever, but that’s exactly what could happen if Dr. Neil Byrne’s (Joe Flanigan) exit therapy fails.

Fortunately, Neil’s a pro at this and is truly committed to helping Kristina. He’ll assure Alexis that he’s giving this his all, so she’ll be appreciative. General Hospital spoilers say Alexis and Neil’s bond will grow stronger. Could a romance be just around the corner? Time will tell, but they’ll have to stay focused on Kristina’s well-being for now.

Over with Sam McCall (Kelly Monaco), she’ll be absolutely fed up with Shiloh Archer (Coby Ryan McLaughlin). She can barely stand to be duping him anymore, so she’ll try to hurry this plot along. Sam will want to take Shiloh down for good, so she’ll step up her efforts.

Other General Hospital spoilers say Ava Jerome (Maura West) will get a disturbing phone call. It sounds like Ryan Chamberlain (Jon Lindstrom) might reach out, which should make Ava more determined to make her plan work. She’s teaming up with Dr. Kevin Collins (Jon Lindstrom), so they’ll get the ball rolling on that and hope it pays off.

Meanwhile, Franco Baldwin (Roger Howarth) will pay Drew Cain (Billy Miller) a visit. It took a long time, but these two finally found a place of friendship. Franco will likely let Drew know he’s there for him. As Oscar Nero (Garren Stitt) fades, Drew will need all the support he can get.

Speaking of Oscar, he’ll have a special goodbye-focused episode on May 1. Whether Oscar actually dies that day or not, it’ll be a time for his loved ones to show their true feelings and bid him farewell. Over with Willow Tait (Katelyn MacMullen), she’ll be rattled by another visit from Shiloh. He’ll be as menacing as ever, so Willow will grow even more concerned for “Wiley Cooper-Jones.”

General Hospital spoilers say Valerie Spencer (Paulina Bugembe) will also face a startling threat. Will it come from Shiloh or perhaps someone trying to keep her away from Kristina? Either way, Valerie’s not the kind of gal who will back down! Finally, Jordan Ashford’s (Briana Nicole Henry) health will take a dire turn. After her shocking collapse, she’ll be in terrible shape at GH.

Jordan will need a kidney ASAP, so her family and friends will pray for a miracle. We’ll give you updates as other GH news comes in. Stay tuned to the ABC soap and don’t forget to check CDL often for the latest General Hospital spoilers, updates and news.